Far away in the Antipodes, Glyn Webster has been pondering the terrible choice the lieutenant-colonel had to make between the muffins, on one side of his breakfast table, and the loaded pistols on the other. The result of Mr Websterâ€™s exercising of his cranial integuments is this splendid heraldic device: 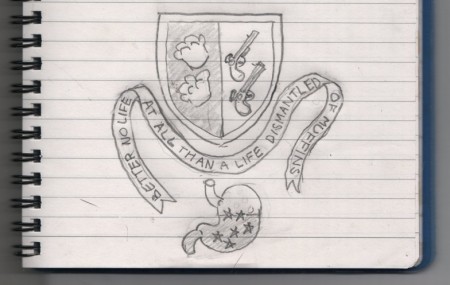 I pointed out to Mr Webster that the muffins shown were unlikely to be the type of muffins which caused the lieutenant-colonel his dyspeptic atrocities. When you print out the device â€“ and note I say â€œwhenâ€, not â€œifâ€ â€“ you may use Tippexâ„¢ and a pencil to adjust the muffins to your preferred muffin-type should you so desire. But remember the religious ruling which states â€œuncertainty of muffin-type is no great sinâ€.

Incidentally, Mr Webster has been reading Zoonomia by Erasmus Darwin, and has found â€œmany alarming stories about pistolsâ€, but not the one involving the lieutenant-colonel and his muffins. Was De Quincey making it up?