Apropos of crow and hare oracles, R., in a comment, takes me to task for being cavalier about the precise nature of the rug upon which one’s cards are dealt and pebbles scattered, and asks for â€“ or rather demands â€“ a rug reading list. It pains me to suggest that such a request merely demonstrates R.’s lack of attunement with the esoteric spheres. It also reminds me that the old fraud G I Gurdjieff began life as a travelling rug salesman. As how could he not? For his trade is hidden in his name. Take the first three letters, reverse them, and voila!, “Gur” becomes “Rug”. Thus we see how human destinies can, sometimes, be inscribed in our being.

I think it no accident, either, that my correspondent R. shares an initial with the subset of floor covering types he is getting all worked up about. I do not use the phrase “worked up” lightly, for of course it reminds us of “The Work” about which Gurdjieff babbled and wrote for much of his preposterous life. I wonder if R. would be driving himself to the same level of hysteria had I recommended dealing the cards and scattering the pebbles upon a mat, or even upon linoleum.

In addition, may I advise R. to be careful what he wishes for? A cursory reading of the medical literature warns us against becoming fumous-brained about floor coverings such as rugs, mats, and especially carpets. Quite literally, that way madness lies! 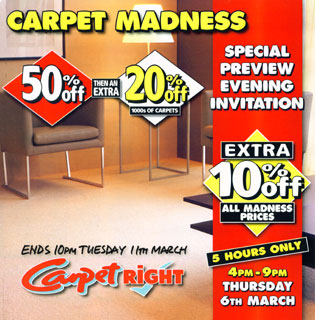 2 thoughts on “A Note On Rugs”