Though his mighty brain confounded mere mortals, Sherlock Holmes was, of course, a dimwit in comparison with his brother Mycroft. Something similar may be said about Blossom Partridge and her sister Flossie.

Blossom is best-known as editrix of Miss Blossom Partridge’s Weekly Digest, quite possibly the finest weekly digest on this or any other planet. It remains, defiantly, a printed paper publication, though one feels sure that if Blossom ever countenanced the idea of going online, she would wipe the floor with the ghastly Arianna Huffington or with Tina Brown of the Daily Beast. Not the least of the charms of the Weekly Digest is that it is hand-written in Blossom’s immaculate copperplate and the copies duplicated on an ancient and creaking Gestetner machine. Blossom also refuses to acknowledge the horrors of decimalisation and the cover price has been held at 4d. By any measure she is a marvel of marvels among women.

Yet she would be first to bow to the even greater marvellousness of her sister. Flossie Partridge is a balloonist, aviatrix, explorer, inventor, secret agent, government spy, and the Lord knows what else besides. She could serve as a role model for any aspiring International Woman of Mystery, did she not remain almost entirely hidden from the public gaze. What little we know about her is thanks to hints dropped by Blossom in her magazine.

For example, Blossom has written movingly about the rare times the sisters spend together, when “we never walk like other people: we skip and gambol to show how girlish we are, as if we were Goosie and Piggy Antrobus”. She alludes to some of Flossie’s more hair-raising adventures in her regular “Glimpses of Flossie’s Hair-Raising Adventures” column, without ever going into the sort of detail that might compromise her sister’s obsessive, indeed maniacal, desire for secrecy. Thus, we might be afforded a “glimpse” of Flossie inventing a new serum, or in hand-to-hand combat with a giant anaconda, but we will not be told the purpose or recipe of the serum, nor the rationale or location of the death-struggle. Nor, incidentally, does Blossom divulge how one might engage in hand-to-hand combat with a beast that has no hands, though by omitting an explanation she guarantees a bulging postbag of readers’ letters.

Regular readers of the Weekly Digest will be aware that in virtually every issue, the “Dear Miss Partridge” letters page includes a lengthy, demented, and hysterical screed from a certain I. Alfred Pigtosser. Occasionally, Mr Pigtosser might address a topic raised in an earlier issue; more often, however, his letter will be a bitter and venomous harangue, barely coherent, shading at times into outright madness. Blossom has stated that it is her policy never to cut or otherwise edit her readers’ letters, and so there are times when a Pigtosser letter takes up six- or seven-eighths of the entire magazine. Readers complain, but Blossom remains unruffled.

It has not escaped the notice of her more astute readers that “I. Alfred Pigtosser” is an anagram of “Flossie Partridge”. Could it be, they ask, incredulously, that this poisonous invective is the work of the editrix’s marvellous sister? To which Blossom has responded by publishing grainy black-and-white photographs purporting to show Mr Pigtosser as an infant, on a tricycle, in a sailor’s suit, next to a large swan. She does not say how she came by these snaps, nor provide evidence of the (blurred) infant’s identity. On the other hand, Blossom is such a marvellous woman that she would surely not try to pull the wool over her readers’ eyes. It is a conundrum to be sure.

Speaking of wool, another of the regular features in the Weekly Digest is “Miss Blossom Partridge’s Woolly Blather”. Here one might find adventurous knitting projects, crochet extravaganzas, and disquisitions upon good wool and bad wool. Every now and then, the “Woolly Blather” and “Glimpses of Flossie’s Hair-Raising Adventures” columns are combined into one, as a surprising number of Flossie’s hair-raising adventures have involved wool in some form or other. One thinks of the incident when Flossie was engaged in hand-to-hand combat with a giant anaconda which, upon closer inspection, turned out to be an extensive draught-excluding sausage knitted entirely from the wool of a merino sheep. Blossom, with her typical editorial dash, appended a pattern so readers could knit their own. As if to provide fuel for the conspiracy theorists, the article prompted a letter from I. Alfred Pigtosser so lengthy, and mad, that it completely filled the next three issues of the magazine.

As far as is known, Flossie Partridge has never published a single word under her own name. Presumably she is too busy ballooning, flying aeroplanes, exploring, inventing, engaged on secret missions, spying for the government, and the Lord knows what else besides ever to find time to put pen to paper. Blossom has said, however, that once, when she and her sister were skipping and gambolling girlishly o’er the green to dance around a maypole, Flossie let slip that she kept a daily diary. It is said to run to thousands upon thousands of pages, scribbled in Flossie’s mad demented scrawl – so unlike her sister’s elegant copperplate! – and kept in an airtight and lead-lined storage facility in a subterranean cavern somewhere below the Swiss Alps. Who knows what secrets it contains? Marvellous secrets! 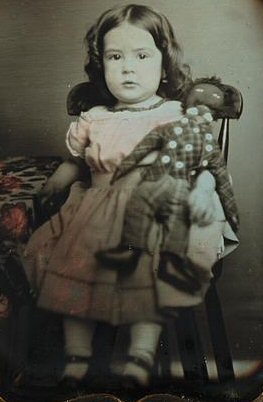 Blossom, or Flossie, or someone else entirely, as a child.