Mossad! They’re Israeli, they’re a secret intelligence service, their agents fan out across the globe engaging in skulduggery including the targeted assassinaton of ne’er-do-wells! What’s not to like? If I had my life over again, I think I’d like to have been a Mossad agent. Granted, I am not Jewish, I am a bit weedy and very myopic, and when once I attempted to play the online game based on the BBC serial Spooks I found it impossible to progress beyond the preliminary screen, but a man can dream. 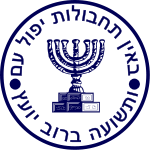 Confidential papers recently released under the Release Of Confidential Papers Pertaining To Fictional Athletes Act reveal the startling information that none other than fictional athlete Bobnit Tivol was a Mossad agent. Who would have thought it? His all too real coach and mentor Old Halob would have been a more probable candidate, what with his murky past and trenchcoat and Homburg hat. Yet now we learn that all along it was the spindly fictional sprinter who was the Mossad agent. Old Halob had not the merest inkling of his protégé’s secret activities.

The world o’ sport is of course the perfect cover for espionage. A tiptop sprinter like Bobnit Tivol will be forever flying around the world from one athletics meet to another, an entourage in tow. When he is a pole-vaulter as well as a sprinter, he will have a good deal of “kit” to cart about with him. You might be surprised at just how many high-velocity sniper rifles, laid end to end, would equal the length of the average pole-vaulter’s pole.

Ironically, on several occasions suspicion did fall on Old Halob. With his murky past and trenchcoat and Homburg hat, and above all his brute non-fictional reality, he was the kind of person dimwitted local law enforcement officials would haul in for questioning when, for example, a gaggle of ne’er-do-wells were found garrotted in a cellar beneath a hotbed of ne’er-do-wellery in, say, Helsinki or Hobart. And wherever fictional athlete Bobnit Tivol went, his coach Old Halob would invariably be there too, stop-watch in hand, chain-smoking high-tar Serbian cigarettes. So it happened on more than one occasion that, while Bobnit Tivol was pounding round and round and round and round the running track, or vaulting over the bar into the sandpit, Old Halob would be dragged from the side of the track or the pit and bundled into the back of a police van.

Because he was not himself a Mossad agent, Mossad did not provide Old Halob with any kind of cover story. The sole account he was able to give of himself, in various Helsinki or Hobart interrogation chambers, was that he was the all too real coach and mentor of fictional athlete Bobnit Tivol. Look, he would splutter, in between catarrh-racked coughing fits, here is my stop-watch! Here is my fictional athletics meeting accreditation! I may look, sound, and act like a Stalinist secret policeman, as indeed I may once have been, possibly, but that does not make me a ruthlessly efficient Mossad agent! Unhand me this instant!

Sooner or later, the dimwitted local law enforcement officials would let him go. He usually had to find his own way back to the athletics stadium, and was thus in an even fouler temper than usual when he got back just in time to watch his protégé winning, or failing to win, a sprint race or pole-vault jump.

The release of these papers will allow diligent researchers to tidy up various unsolved killings of ne’er-do-wells around the globe over several decades. By matching the killings to fictional athletics meetings in which Bobnit Tivol participated, we might see the hand of Mossad where it has been least suspected. New light, too, should be cast on Bobnit Tivol’s fictional Memoirs. It goes without saying that the spindly fictional athlete never openly acknowledged his role as a Mossad agent – he was too ruthless and efficient ever to make such a slip – but a thorough rereading, and even more thorough rerereading, may grant us a new perspective on the history of the second half of the twentieth century. If nothing else, we might be able to cobble together a convincing explanation of the targeted assassination of Gliptow and his ne’er-do-well pals in their HQ slap bang next to the athletics stadium in Helsinki (or possibly Hobart) in May 1968, when the world’s attention was diverted by shouty students throwing pebbles at the gendarmerie.