It was shortly after he excavated the tomb of King Memhenhop that the renowned archaeologist Sir Bedsore Peeve realised he had been cursed. Armed as he was with a copy of The Bog People by P. V. Glob – a book and an author I would have had to invent did they not already exist – Peeve was hoping to exhume a bog person, or at the very least a beaker person. The last corpse he expected to find was one that was ancient and Egyptian and kingly and mummified. 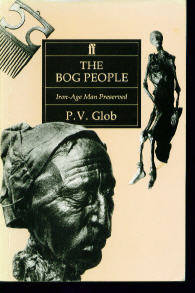 “Gosh, chaps!”, he said to the chaps who were helping with the digging, “This doesn’t look like a bog or beaker person to me. It looks like an Egyptian mummy, and a royal one to boot!”

But as he turned his head to look at the chaps to whom he was speaking, he saw that they were all running away very very fast. He could not see their faces, which were stricken with terror. Peeve grunted and let a bit of soil trail through his fingers and lit his pipe. He patted the mummy on its bandaged bonce and then walked back to his hotel, where he spent a pleasant evening on the balcony of the bar, getting sloshed.

While he was getting sloshed, Peeve browsed through a copy of the Reader’s Digest which was lying around, and happened upon an article about King Memhenhop.

Memhenhop, he read, was an exceedingly unpopular king, on account of his unseemly personal habits, disgusting table manners, and pomposity. Added to which, he detested cats, and among his favourite pastimes was the drowning of kittens. This did not go down well with the cat-worshipping Ancient Egyptians. It was the kittens who went down the well, several at a time, tied up in a sack. Eventually his satraps rose up against King Memhenhop, and they tied him into a sack while they debated what to do with him. From within the sack, the King jabbered a stream of curses and imprecations. Though his voice was muffled, one particularly sharp-eared satrap was able to catch the gist of his babbling, and he wrote it down upon an Ancient Egyptian papyrus. This text has become known as the Curse of Memhenhop, and is feared as much as the Necronomicon of the mad Arab Abdul Alhazred.

The satraps decided to throw the ensacked King down the well in which he had drowned so many kittens. The next day, however, the new King, Memhophen, decreed that his predecessor should be mummified and buried in a bog. Thus it was that his corpse was hoisted out of the well, taken out of the sack, mummified, and buried in a bog. The location of that bog has never been discovered, and it is thought that if it ever is, the Curse of Memhenhop will fall upon he who exhumes the dead King.

“Oo-er, missus,” said Peeve to himself when he finished reading. As he got up to replace the copy of the Reader’s Digest on a side table, he sprained his ankle. But it was by now very late, and he was very sloshed, and he did not notice.

It was only when he woke up the next morning, and felt the pain in his ankle, and banged his head on the bedpost, and suffered a minor heart attack, and saw in the mirror the plague of boils with which his face was covered, that the archaeologist began to suspect that he had fallen victim to the Curse of Memhenhop. He was confirmed in this view when, staggering as best he was able down to the breakfast parlour, he found the room to be filled with a swarm of locusts which had devoured every last croissant and sausage.

“No wonder the chaps ran away screaming yesterday!” he said, and as he did so he found that his tongue did cleave to the roof of his mouth.

Swatting the locusts away, Peeve made his way to the balcony bar to retrieve the Reader’s Digest. It was the kind of magazine, he thought, that might well contain a helpful article, written perhaps by a qualified doctor or exorcist, on the best way to undo the effects of an Ancient Egyptian curse. Alas, he found the balcony in flames, and the charred pages of the Reader’s Digest flapping in the wind, a wind that grew in force until it became a gale, so terrific that it pitched the hapless archaeologist over the edge of the blazing balcony and into a bog below.

This was a different bog to the one in which he had dug up King Memhenhop. It was a peculiarly stinking bog, seething with hideous slimy blind albino wriggling beings. Poor Peeve wondered if things could possibly get any worse. Then it began to rain, and the soggy bog became even soggier.

It was at this point that a deus ex machina appeared, in the form of one of the chaps. He came running up, and pulled the archaeologist out of the bog. They repaired to a nearby snack bar which had not yet been attacked by the locust swarm.

“You have fallen victim to the Curse of Memhenhop!”, said the chap.

“So it seems,” said Peeve, plucking a hideous slimy blind albino wriggling being out of his majestic archaeologist’s bouffant.

“We have to get you out of here to a place of safety,” said the chap, “Luckily, I have a spare plane ticket. Manchester United are flying back to Blighty following the second leg of their 1958 European Cup tie against Red Star Belgrade. There is just one seat left, and it’s yours.”

“Thank God!”, said Peeve, “I shall be relieved to return to Blighty!”

“I’m sure you will,” said the chap, “Though don’t forget that the plane is stopping off at Munich to refuel.”

“Righty ho!” said Peeve, and he pocketed the plane ticket, and made his way to the airport, pursued by invisible fiends unleashed by the mummy’s curse!