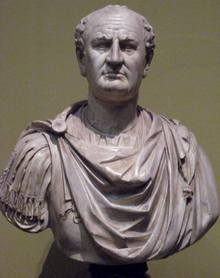 The dying words of the Roman Emperor Vespasian (9-79 AD) were “Væ, puto deus fio”, or “Oh! I am becoming a god”. And so it proved, with the foundation shortly thereafter of the Vespasianite church. Initially successful, numbers of adherents gradually dwindled, and there were the inevitable splits and schisms. Like Muggletonianism, however, Vespasianism proved surprisingly resilient, and today there are thought to be as many as a dozen discrete offshoots of the church scattered across the globe.

So disparate are the grouplets that any general statement of the tenets of the church is well nigh impossible. Almost the only thing they have in common is veneration of Vespasian as God. Interestingly, though the mortal emperor himself suggested he was becoming merely a god, one among many, within a hundred years of his death most if not all Vespasianites of whatever stripe arrived at a monotheistic interpretation of his divinity. This remains the case today, particularly among Fundamentalist Vespasianites, whose doctrine holds that, upon becoming a god, Vespasian slaughtered all other gods, known and unknown, past, present, and future, and continues to strangle at birth any godlike being that comes tottering over the horizon. Some other Vespasianites suggest that the other gods which did exist in 79 AD slunk away, or dissolved themselves, or exploded in puffs of vapour, when they saw how fantastic and magnificent Vespasian was.

A second feature common to all the different subgroupuscules is the importance placed on the public urinal as a place of worship. While a living emperor, Vespasian placed a tax on urine, useful for its ammoniac content. This led to his name being appropriated for urinals in several languages, for example the French vespasienne. Generally speaking, among Vespasianites, any public toilet is a holy place, and specially built ones are used for their church services. Again, Fundamentalist Vespasianites take a more hardline view, and consider all toilets, public or private, from super Japanese advanced technology toilets to primitive ditches and pits, to be sacred.

The literature of Vespasianism is sparse. Though as emperor Vespasian was generous to men of letters in general, he despised philosophers, who he saw as unmanly complainers who talked too much. Some strands of modern Vespasianites, in particular the New Unreformed Quiet Vespasianites, use this to justify their vows of silence. According to their creed, it is only permitted to speak when pissing in a holy toilet. There are thought to be only six or seven New Unreformed Quiet Vespasianites still at large in the world, though it is said they hope for an increase in their numbers following the advent of mobile telephony.

Though worldwide there is a steady decline in the number of practising Vespasianites, in one or two little pockets the faith is thriving. A relatively new offshoot, the New Reinvigorated Proselytising Vespasianites, is very active in the twin worlds of both celebrity and sanitation, with the Hollywood branch claiming several high profile converts. Yet infighting continues, with punch-ups common, particularly in the vicinity of toilets, where loud noisy New Reinvigorated Proselytising Vespasianites often come to blows with New Unreformed Quiet Vespasianites. Such incidents are rarely categorised by law enforcement officials as religious crimes, though that may change.

Inevitably, perhaps, Vespasianites of all colours have become the target of ridicule and contempt by New Atheists. Richard Dawkins is said to have funded a body calling itself the Federation of Enlightened Ex-Vespasianites, while before his untimely death Christopher Hitchens was bashing out a paperback provisionally entitled 500 Pages Of Ridicule And Contempt Heaped Upon The Head Of Vespasian. Critics alleged that the drink-sodden ex-Trotskyist popinjay was deliberately confusing Vespasian with the Vespasianites in a patent act of provocation. Hitchens himself did not claim to be becoming a god on his death bed, although his status among the American college student population is approaching divinity, as with the still-living Noam Chomsky.

What would Vespasian himself have made of all this? He was celebrated, in life, for his ready wit, and many think his dying words were actually a joke. Could it be that a religion with a pedigree of two thousand years was founded on a quip? Certainly Vespasianites throughout history have not been noted for their sense of humour. Whether New or Roman or True or Wee Free or Quiet or Blairite Third Way or Reinvigorated and Proselytising, Vespasianites are a dour and grim-faced bunch, and if ever you encounter one in a toilet the best thing to do is to bash them on the head with a thick hardback volume of intractable German philosophy. You never know, it might knock some sense into them.