When she observed that I was boggle-eyed and twitching and panting, I explained to my lifestyle coach that I suffered from debilitating panic attacks.

By the way, if you do not have a lifestyle coach, I strongly recommend that you acquire one. Mine is peculiarly expensive, but I think some come at a discount. I can say without fear of contradiction that since hiring my lifestyle coach I have become a butterfly where once I was a caterpillar. I fly where once I crawled. Actually, it is not true that I say that without fear of contradiction. Plenty of people will line up to contradict me, to charge that I more closely resemble a creature crawling upon its belly upon the earth. Hence my panic attacks.

“What you need,” said my lifestyle coach, “is a panic button.”

Happily, she had a box full of such buttons in her desk drawer, and sold one to me there and then. It was peculiarly expensive, for a button, and there was no discount available.

When I got home, I sewed the button on to my jacket, roughly in the vicinity of my heart. The idea was that, whenever I felt a panic attack coming upon me, I should clutch at the button desperately. To avert the risk of ripping the button loose, in my desperation, I sewed it on using a good deal of extremely strong thread, as my lifestyle coach advised. I need hardly add that the jacket to which I chose to affix my panic button was of Tyrolean sports-casual cut, similar to that worn by Christopher Plummer in The Sound Of Music (Robert Wise, 1965). It is my jacket du jour, every jour. 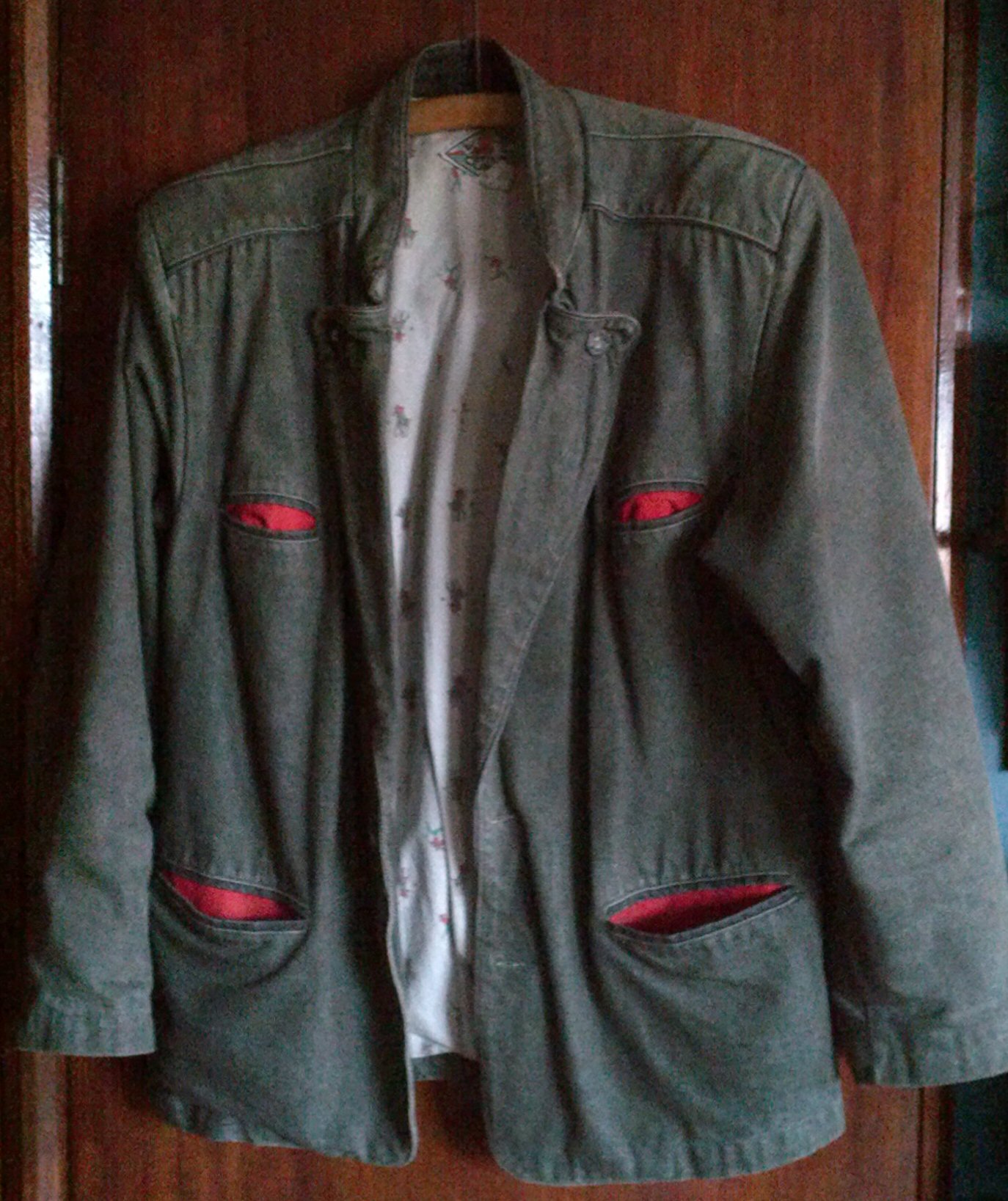 Tyrolean sports-casual jacket, prior to affixation of the panic button

Now it is a curious fact that many people think they know much about buttons without really knowing the first thing about them. To the untrained eye, for example, my panic button looked like a stray button inexplicably sewn on to my jacket more or less over where my heart was pounding like a steam hammer. The button-ignorant might posit the slapdash handiwork of a myopic or distracted sempstress. Thus, prancing along the boulevard in the autumnal sunshine for the first time since affixing my panic button, I was emotionally prepared for the barrage of catcalls and brickbats I was sure to receive. If and when an urchin pointed at my heart and shouted “Oi, mister! You’ve got a stray button there on your Tyrolean sports-casual jacket! Looks like it was sewn on by a half-blind sempstress!”, I would not need to clutch at my button in desperation to stave off a panic attack. Already it seemed to be working its magic, helping to keep a sense of gibbering terror welling up and undoing me.

As it happened, on that first outing with the panic button, I had no cause to clutch at it at all. It was if, with the reassurance of its presence, all the usual prods to my panic vanished. Louring clouds, misaligned paving slabs, yapping puppies, bookshop window displays piled high with Jeanette Winterson paperbacks . . . where usually I would shriek and stagger boggle-eyed and twitching and panting through the streets, I was a picture of calmness and insouciance. I may even have essayed a whistle, a chirpy tune half-remembered from a childhood jamboree.

On the corner of Ringo Starr Street and Erebus & Terror Mews, I bumped unexpectedly into my lifestyle coach. She was sitting on a bench feeding birds with stale bread from a greaseproof paper bag.

“I have to say,” I had to say, “This panic button you sold me is worth every penny! I have been out and about now for ten minutes and not once have I felt even the merest pang of panic. I have not had to clutch at it in desperation once!”

She turned her head to look at me and there was an eerie cast to her countenance.

I looked at her more closely and realised she was not my lifestyle coach after all. Or, if she was, she had aged by several decades since I saw her the day before. I felt a sudden tremor of fear.

Birds were swooping around us in teeming profusion, crows and linnets and sparrows and starlings and tippihedrens and peewits. Instinctively, I knew the moment had come to clutch at my panic button. But as I raised my hand towards my heart, where the button glittered on my Tyrolean sports-casual jacket, one of the birds swooped in and pecked it clean away. I had used extremely strong thread, but it was no match for the sharp savage beak of the crow. The bird flew up and up, carrying my panic button away into the sky, the sky where I ought to have been fluttering like a butterfly. Instead, in my panic I tottered and fell to the ground, upon misaligned paving slabs, down on my belly like a caterpillar. I clutched at the strand of broken thread where my button had been. My lifestyle coach, or the aged biddy who had taken her place, stood up from the bench, and trod upon the small of my back as she shambled away with her now empty greaseproof paper bag. The louring clouds broke, and a deluge poured down upon me. I was unbuttoned and undone.

One thought on “On My Panic Button”