Having let the Archbishopric of Canterbury slip through my fingers, I am not going to make the same mistake with the other big job now unexpectedly on offer. George Entwistle’s resignation after just fifty-four days at the helm means the post of BBC Director General is vacant. As Leonard Cohen put it, “I’m your man”.

The present BBC is a huge and bloated organisation, preposterously so when we consider what it does. The clue is in the name: British Broadcasting Corporation. It broadcasts programmes on the telly and the radio. That’s all. So let us gain some perspective. It is not governing a country or fighting a war or sending a mission to Mars. (Someone on the Today programme this morning did refer to the imminent “Star Trek world of the 2020s”, but that is a topic for a separate postage.)

I have no idea what all those hopeless hapless BBC-lifer nonentities in the seemingly numberless tiers of management actually do, and nor, I suspect, in their heart of hearts, do they. I would immediately dispense with the lot of them. Do you know how ResonanceFM is run? There is a benevolent dictator, assisted by one person who knows how all the technical gubbins works and one person who makes sure they have enough programmes to fill the schedule. And that’s it. The BBC could easily be run on the same lines, perhaps doubling up on the numbers of assistants to reflect that there is a TV arm as well as a radio one.

Now let us look in more detail at each of those.

Television. I don’t know if you have read a tabloid newspaper recently. I have, and I can tell you that a terrifying percentage of the content is related directly to television. If you removed the TV-related stuff from the average tabloid you would be left with a few flimsy pages. I think what this shows is that television has had a lethal and degrading effect on the culture of the masses. Truly we live in an age of pap. So my first instinct would be to shut down the television service entirely. That, however, is probably an impossible dream, even for as dictatorial a Director General as I intend to be. What would be feasible, however, is to scrap all the current programming and show only Key-approved content. Call it elitism, if you will, but I know I know best, and I am sure after a short while everyone else will agree.

Thus, for example, if you had a choice between hour upon hour of Celebrity Antique Cookery Car Jungle Challenge or a season of classic Googie Withers films, which would you prefer? Not that you will be given the choice under my dominion. It will be Googie all the way, every day! And when we have exhausted the Googie canon we will show all of Jacques Rivette’s films, and then Guy Maddin’s, on rotation. There are of course other approved film persons other than Googie and Jacques and Guy, and they will get their slots.

But oi!, I hear you cry, that is cinema, not television. Television is a separate and distinct medium in its own right. To which I reply, maybe so, but there needs to be a moratorium while we bash some sense back into the heads of the masses. After, say, ten years of my limited schedule, it might be possible to reintroduce certain made-for-television programmes, chiefly Scandinavian police dramas and a show dedicated entirely to Dr Alan Statham from Green Wing.

Radio. I mentioned ResonanceFM above, and it seems to me the best thing to do is simply to adjust the current BBC wavelengths so they broadcast Resonance instead. This would do wonders for the nation’s morale. As I would be in charge, there would of course be a channel dedicated wholly to Hooting Yard On The Air. There are already hundreds of hours’ worth of me babbling into a microphone available as podcasts, so these could be put on an ever-repeating loop.

I would, however, retain two programmes from the current BBC schedules, the shipping forecast and Farming Today. For the latter, the existing roster of presenters would be ditched (ha ha!) and replaced by some proper peasants.

Other Activities. BBC persons witter on at length about a multi-platform approach. Basically, all this means is making the TV and radio programmes available on computers and laptops and iFaffs and other digital devices. All you need is a computer-literate teenperson to sort that out.

My finest achievement, however, would be to resurrect The Listener. Younger readers may be unaware that from 1929 to 1991 the BBC published the best weekly periodical I have ever read. It was an intelligent general interest magazine of the kind now absent from our newsagents’ shelves. (Both The Spectator and The New Statesman have a political axe to grind; The Listener didn’t.) As a teenperson, I used to read it every week from cover to cover, and learned more from it than from any other single source. I knew the rot had set in when it was closed down two decades ago, a decision I can still not forgive. 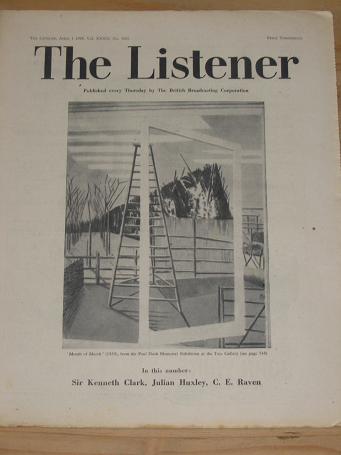 It is clear from the above that I am the best possible Director General the BBC could possibly have. I await “Lord” Patten’s call (assuming he is still in post at the BBC Trust when you read this. If not, I’ll take his job too, and I won’t need ennobling.)