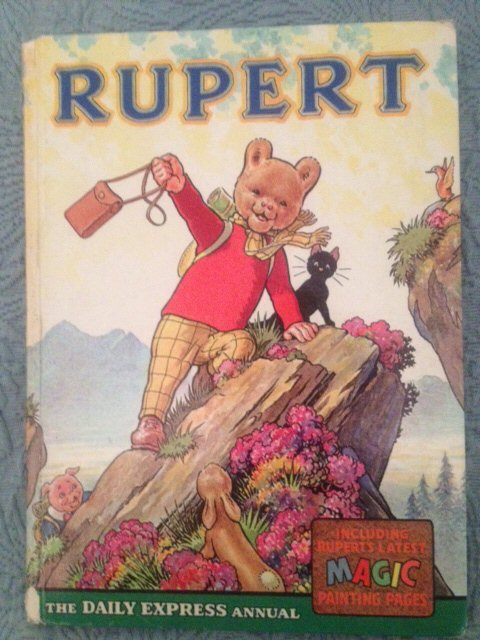 When I was a tot, one of my treasured books was a Rupert Bear Annual, the only one I ever owned. I pored over the stories in this volume again and again, looking at the pictures, reading the tales in the rhyming couplet captions, and then rereading them in the prose versions printed below. Nutwood seemed a mysterious and magical world, where a bear lived with his ursine ma and pa, counted an elephant and a badger and a pig among his pals, where the local bobby was a dog called Police Constable Growler, and where the cast of human characters included an eccentric professor with a dwarvish valet and a mystic Oriental Yoko Ono type named Tigerlily, not forgetting Beryl the girl guide and an assortment of fisherfolk, tinkers, peasants and explorers.

I have very few mementoes of my childhood, and the Rupert Annual was among those I thought lost. I could not, at any rate, recall the last time I had seen it. Occasionally I would rummage in secondhand bookshops seeking a copy, though on the rare occasions I found one it proved to be ruinously expensive.

Then, last month, visiting my sister in Maryland, I discovered what had become of my annual. In the late 1970s, my mother had given it to my niece, and ever since it had been sitting unremarked on a bookshelf in my sister’s house. I learned this, however, on the way to the airport at the end of my stay, when for some reason Rupert Bear cropped up in conversation.

How thrilled I was this morning to unwrap my sister’s Christmas gift – the treasured book from my childhood. And how astonished I was, leafing through it, to realise how much of Hooting Yard is there in embryo. Weird countryside, picnics, entanglement in bracken and thorns, eerie mists, aquatic sea beings. . . all this stuff must have entered my head long, long ago, and nestled there. I shall examine the book more thoroughly and, perhaps, in due course share with you lot the more Hooting Yardy elements I find therein.

And to my sister, much thanks! She appended this verse (appropriately in rhyming couplets) to the wrapping:

A Valediction for Rupert

Oh Rupert! Since we needs must part
I wrap you in compelling art

Of books beloved from long ago,
Their whereabouts I do not know.

Like you they may have flown away
Without permission, I dare say,

And sit now on some distant shelf
Unloved, neglected, by themself.

Dear Rupert you were never lost
But treasured, read, and tossed

About by little ones who loved you too
Just as much as Frank must do.

Safe journey home where you belong
And think of me, I shall be strong

And shed no tears as you depart
For books still live within the heart.

NOTE : My sister, by the by, is Rita Byrne Tull, whose Dispatches From The Former New World appear in The Dabbler.