Newspaper reports of the annual swan upping on the Thames reminded me of an amusing swan-related matter which I had unaccountably forgotten to mention. During the Wimbledon tennis championships, I forget which game exactly though it may have been one of the men’s semi-finals, during one of the breaks between sets, the BBC cameras drifted off to the surrounding scene, and showed a jetty by the river around which sunbathers sprawled. Also present was a swan, approached by a tiny tot who looked as if she was wanting to feed it a sandwich. The proximity of tot to swan led one of the commentary team to observe that, belying their elegance and grace, swans are of course savage and aggressive creatures. Whereupon fellow-commentator Tim Henman – whose surname suggests he knows a thing or two about birds, or at least about poultry – said (and I paraphrase from memory):

Whenever you see a swan, someone always points out that they are capable of breaking your arm. Have you ever met anybody who’s had their arm broken by a swan? I haven’t.

Sadly, the cameras then returned to the tennis, and we were not treated to any further swan-talk from Hen-man. 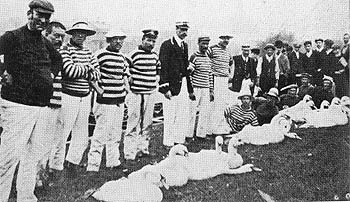 Swan upping in the last century

One thought on “Henman, Swanman”