In 1982 I spent much of my time making postcards, which I sold for a pittance to eager punters from what would now be called a pop-up stall in Norwich. Below is an example of the sort of thing I was doing.

The source material for both words and images was a huge pile of National Geographic magazines from the 1950s and 1960s acquired from various second-hand bookshops. To create the captions I employed a cut-up technique akin to that used by William S Burroughs and David Bowie, but far more amusingly than either of them ever did, particularly the former, a tedious gun-toting drug-addled uxoricide.

Younger readers may find it difficult to fathom, but in Norwich in 1982 it was well nigh impossible to find an affordable colour photocopying facility. I thus sent my originals to my friend Peter Ross in London, and Peter organised the copying and sent me the results by post. I then employed scissors and glue to mount the hysterically funny images on to card, ready for sale to East Anglians.

I think Peter is still in possession of most of the original artwork, but this one came to light the other day. The captions read as follows:

In this convivial land, trendy youngsters like Walter And Jorg searched the ground for clues.

Walter and Jorg are each identified by separate name captions. 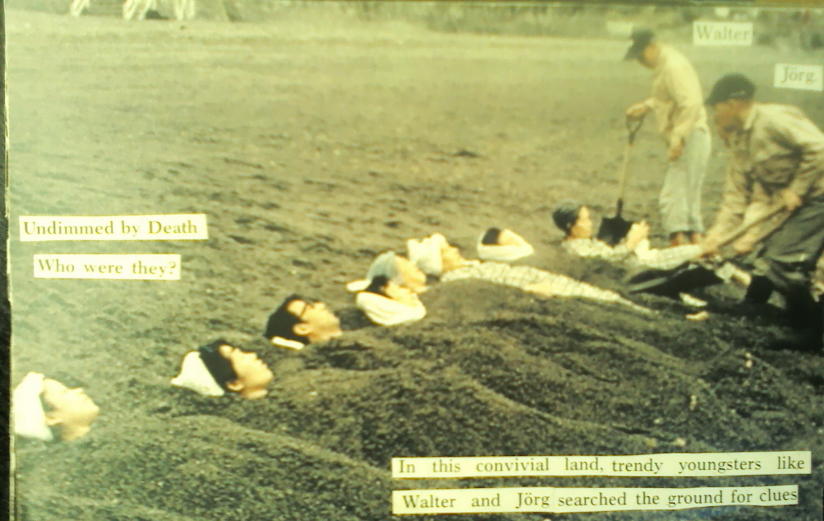 2 thoughts on “A Postcard From The Last Century”