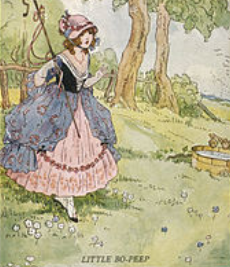 Good evening, and thank you for your warm welcome. Well, warm-ish. The clapping petered out rather quickly, and I must say that other audiences, in other auditoria, have shown a sight more enthusiasm. But there we go. I am not complaining. This lecturing lark is much preferable to being out and about in all weathers in the company of sheep, dim-witted and fearful beasts that they are. It is more lucrative too.

But I should introduce myself. My name is Bo Peep. I am often known as “Little” Bo Peep by dint of my diminutive stature. I don’t mind being called “Little”. It has an affectionate ring. But I do object when some newspapers compare me to a dwarf from a Wagner opera. Clearly, the organisers of tonight’s event expected me to be smaller than I am. What a tiny lectern!

The one thing most of you will know about me is that I lost my sheep. I do not deny it. Quite why it caused such a kerfuffle in the press is a mystery to me. I became the poster girl for neglectful and inept shepherdesses, and even now I can barely leave my cottage without some mucky little country urchin calling out to me to ask where my sheep are. It is a trying existence.

Thus I welcome this opportunity to tell my side of the story. It all happened on one of those blustery misty wuthery weathery days, in some godawful rustic backwater. As usual, I was sitting in a field, supervising several sheep. My childhood ambition of intergalactic space travel, of boldly going where no Peep had gone before, seemed as far off as ever. Bored out of my considerably acute mind, I drifted into a doze. And as I dozed, I dreamed.

I dreamt of the moon and a yew tree. The light was blue. Grasses prickled my ankles, and I simply could not see where to get to through the fumy, spiritous mists. The moon dragged the sea after it like a dark crime. Bells startled the sky, eight great tongues affirming the Resurrection bonged out their names. The yew tree pointed up. It had a Gothic shape. The moon was my mother. Her blue garments unloosed small bats and owls. She was bald and wild. The message of the yew tree was blackness, blackness and silence. I started awake, rubbed my eyes, and saw that the sheep I was meant to be shepherdessing were gone.

My immediate hunch was that they had been abducted by a band of roaming Wagnerian dwarves. I had read of several such crimes in the Daily Nibelungenlied And Countryside Advertiser. So, with the gung ho approach for which we Peeps are universally admired, or if not universally then at least in and around Sibodnedabshire, I hoisted my crook and marched off to the newsagent’s kiosk, under those pollarded willows by the canal just before the level crossing at Ketchworth.

It was not the Advertiser I was looking for. It so happened that this newsagent kept in stock various seventeenth-century tracts, including Dagons-Downfall; or The great IDOL digged up Root and Branch by Roger Crabb, A Fiery Flying Roll by Abiezer Coppe, and The Neck of the Quakers Broken by Lodowicke Muggleton. The one I wanted – obviously – was The Lost Sheep Found by Laurence Clarkson. After a close reading of this pamphlet, I felt sure I would be able to locate my sheep, and they would no longer be lost.

I purchased a copy and repaired to a bosky arbour to read it. I had barely digested the opening paragraph when I was set upon by a vulgar mechanic. He was a repellent and vile and filthy fellow, not unlike a Wagnerian dwarf, though considerably taller. I cried “Unhand me, sir!”, and smashed him in the face with my shepherdess’s crook, neatly breaking his jaw. “Woe betide those who mess with a Peep!” I added, kicking him in the head as he lay sprawled and whimpering beneath a plum tree’s slender shade. Above us, in the shining summer heaven, there was a cloud my eyes dwelled long upon. It was quite white and very high above us, then I looked up and found that it had gone, just like my sheep.

In the course of bashing up the vulgar mechanic, I had inadvertently dropped my seventeenth century tract into a puddle, and not just any puddle, no siree, but a muddy puddle, the muddiest of muddy puddles it had ever been my misfortune in which to inadvertently drop a seventeenth century tract. Laurence Clarkson’s timeless sheep-finding words were rendered wholly illegible. What was a poor Peep to do?

It was at this point, just as I was venting my vehemence upon the sprawled mechanic by biffing him several more times with my crook, that I heard distant baas. Now, in my experience as a shepherdess in and around Sibodnedwabshire, this sound could mean only one thing. It meant there were sheep in the distance!

Like a mad thing, I galumphed towards the sound of baas, and as I approached, I spotted, fleeing, a band of Wagnerian dwarves. It may have been the sight of me bearing down on them with my crook that caused them to scamper so swiftly away. More likely, I think, is that they had belatedly realised the unutterable tedium occasioned by the company of sheep.

It is a tedium I know well. Or, should I say, knew well. For the unexpected outcome of my notoriety as an inept shepherdess who loses her sheep is that not a single farmer will any longer entrust me with his flock. At first, this was a harrowing turn of events. I fell into penury and need. But as my story spread, and songs were sung about me, so infamy uncurdled into fame. I began to be invited on to television chat shows, notably an appearance on Russell Harty Plus. Colour supplements published fawning profiles of me, all warts removed. Now, with these lecture tours, I am raking it in. And I don’t mean the sort of peasant raking that the likes of Huw Halfbacon are doomed to for eternity, in an eerie ever-repeating cycle of fate. No, I am raking in the moolah-boolah, and soon I hope to have saved enough to realise my childhood ambition, and be the first Peep in outer space, lost, like my sheep, but unlike them lost in the stars, lost out here in the stars. little stars, big stars, blowing through the night, and I’m lost out here in the stars …