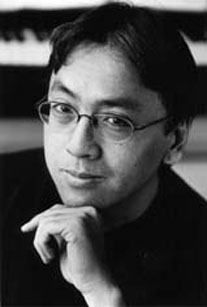 When, recently, it was announced that the Nobel Prize for Literature had been awarded to Kazuo Ishiguro, I thought I ought to read one of his books. Leaning out of the window, I hailed a passing urchin and sent him scampering off to what passes for a lending library in my bailiwick. Now this young wastrel was either inattentive or hard of hearing, for when he returned, several hours later, he brought, not The Redundancy Of Courage but The Consistency Of Porridge, a book by the noted food writer Rex Foodwrite.

Exasperated, I smacked the urchin on the head, but I took the book anyway and sat down to read it. And what a revelation! Foodwrite gives a day-by-day account, in exhaustive detail, of the consistency of his breakfast porridge over a two-day period. His prose is at once Miltonic and Kafkaesque, Beckettian and Poeish, Bellowy and Ibargüengoitiaian. At times I was reminded of Pebblehead.

“For many years I have been strictly an eggs ‘n’ bloaters man,” he writes, “But in the interests of tiptop literature of the highest quality, worthy of a Nobel Prize, I decided to eschew my usual breakfast for a couple of days and eat porridge instead. On the first day, it was thin, like gruel. On the second day, it was thick, like sludge.”

Over the succeeding 849 pages, the author proceeds to extrapolate from this pair of porridge consistencies a series of dazzling porridge-related extrapolations. Not the least of his insights is his contention that the consistency of porridge, at breakfast time, can serve as a dramatic bit of folderol in an award-winning motion picture starring a Welsh actor who is tortured by the realisation that his speaking voice is not, and never will be, as golden as that of his late compatriot Richard Burton. One only needs to hear the latter intone the words “Broadsword to Danny Boy” in Where Eagles Dare (Brian G Hutton, 1968) to know this, of course, but Rex Foodwrite goes on to provide a shot-by-shot analysis of the film, porridgeless as it is, which left this reader, at least, stunned.

When I recovered consciousness, The Consistency Of Porridge had fallen from my lap on to the floor, where it was being nibbled by mice. I never returned it to the lending library.

ADDENDUM : The Redundancy Of Courage is a novel by Timothy Mo, not Kazuo Ishiguro. This rather destroys the conceit of the above potsage [sic]. Oops.