On 28 December 1973, I attended my first gig. I had been taken to concerts before, notably (and inexplicably) by my father to the Albert Hall to see the absurd gravel-throated troubadour Rod McKuen, but this winter’s night was my first outing, unaccompanied by an adult, to the world of rock. My friend Paul Pearce and I took the Central Line into London from our homes in the blighted wastelands of suburban Essex, and fetched up at the Lyceum, just off the Strand. We had come to see … Gong (or The Gong, as Bernard Levin would have it). 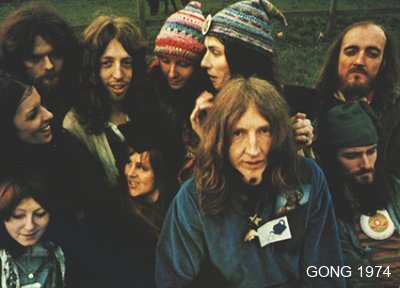 Now, bear in mind that I was a wet-behind-the-ears young teenperson. Molesworth would have called me uterly wet and a weed, and he would have been right. Somehow, in the preceding months, I had managed to convince myself that a bunch of drug-addled hippies caterwauling about gnomes and flying teapots represented a world I was avid to be part of.

Many of my schoolfriends were in thrall to glam rock, but I pooh-poohed Marc Bolan and David Bowie and their ilk as hideously commercial. I veered towards what I thought of as the progressive and the underground, and Gong fitted the bill. So there were Paul Pearce and I, wide-eyed and innocent, surrounded by long hair and beards and kaftans and foul-smelling Afghan coats, while on stage Daevid Allen and his chums caterwauled and parped and made the kind of din I told myself I adored.

Being wet and weedy, Paul and I of course had to ensure we did not miss the last tube train home, so we left the gig early. My memory is dim, but I suspect I was elated. I had seen my future, or so I thought. I would live in a filthy commune and take lots of drugs and reject straight society and possibly even strum a guitar.

It did not quite work out like that, though the dream lingered for a couple more years. I went to lots more gigs, and saw Soft Machine and Stackridge and Henry Cow and Wally and Kevin Coyne and Jethro Tull and Hatfield & The North and many others. But I never saw Gong again.