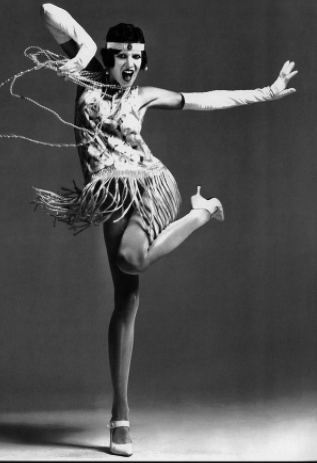 In her distant youth, the balletomane Nan Kew was a flapper. Not yet smitten by the ballet, she liked to flap about in speakeasies, getting dizzy on illicit cocktails and executing the latest dance crazes to the sound of boogie woogie and similar musical woogies, as performed by hot jazz quintets led by rascals.

It was in one speakeasy, on 43,722nd Street, that Nan Kew encountered the lumbering walrus-moustached psychopathic serial killer Babinsky. In those days, of course, the phrase “serial killer” had not yet been coined, so Babinsky’s modus operandi remained sub rosa, and he did not have coppers on his trail.

The Helsingfors poliisi may not have had their eyes on Babinsky that night but somebody else did. Lurking in the speakeasy subfusc was the serial killer’s long-lost idiot half-brother, Babinsky 2. He was watching Babinsky’s every move – and what moves! Babinsky was out on the dancefloor, essaying some new dance steps of his own invention, which he called “the lumbering psychopath”. Those of you familiar with the dances of the era will recall it from its abbreviated name, the lumberpsych, which became wildly popular and spawned such hot jazz standards as Papa Done Gone Lopped Off My Limbs Again and Polka Dots, Hair Oil, And Brutality.

Now it so happened that at this time, Babinsky 2 was Nan Kew’s paramour. They seemed an ill-matched couple, the flapper and the idiot, but there was a definite, if inexplicable, chemistry between them. Thus it was that Nan Kew, dizzy on illicit cocktails and slumped somewhat lopsidedly against Babinsky 2 in their booth in the speakeasy gloom, knew without asking why her darling was transfixed by the lumbering brute on the dancefloor. Babinsky 2 longed for a reconciliation with his long-lost brother, from whom he had been parted ever since that catastrophic picnic on the edge of the forest at the end of the war. Or had it been at the beginning of the war? So fuddled was his brain that Babinsky 2 could no longer remember. All he knew was that he had a burning desire to climb trees and play pin-the-antennae-on-the-locust again with his brother, to relive their carefree childhood in the shadow of the Big Formidable Mountains.

Then dizzy Nan Kew had an idea.

“I am sure he won’t recognise you if you don a disguise,” she slurred in her woozy way, “We could get you up as a Levantine toothbrush salesman, or a crippled Dutch ski-lift operative, and Babinsky will never guess your true identity. Then, if we persuade him there is a cuddly little hamster or guinea pig trapped at the top of that sycamore tree in the street outside the speakeasy, the two of you can climb it together, just as if you were carefree tots before that picnic. Meanwhile, I will gather pencil and paper and a pin and a blindfold, and when you come back in you can play that foolish game you were both so fond of.”

“You will just have to convince your half-brother that the hamster or guinea pig atop the tree is an invisible one,” added the flapper, “But that should not prove difficult. Just tell him there has been a plague of invisible small cuddly mammals in Helsingfors and you will show him the press clippings tomorrow. That will give me more than enough time to make some counterfeits on a Gestetner machine.”

Dizzy as she was, Nan Kew was already displaying the resourcefulness which later stood her in such good stead as a balletomane. (See her Memoirs for detailed clarification.)

That night, everything went according to plan. The flapper and the idiot managed to pull the wool over Babinsky’s eyes. The next day, however, it all went wrong. The Gestetner machine was jammed. Mice nibbled at Babinsky 2’s disguise. There was a teeming downpour and thick fog. War broke out following skirmishes on the border at daybreak.

When they went to meet Babinsky at midday on Sawdust Bridge as arranged, the serial killer was armed with his axe and his hatchet and his slicer and god knows what other fearsome sharp implements. Above his walrus moustache, his eyes burned with psychopathic psychopathology. Babinsky 2 and Nan Kew turned tail and fled through the narrow Helsingfors streets.

It would be forty years before the half-brothers met again. During all that time, Babinsky 2 treasured his memories of that one evening. For a cherished hour, Babinsky and Babinsky 2 had relived the idyll of their pre-picnic childhood, all thanks to the quick wits of future balletomane Nan Kew!

This article first appeared in The Weekly Intelligencer Regarding The Doings Of Flappers, Idiots, & Serial Killers In & Around The Speakeasies Of Antebellum Helsingfors (obtainable by subscription).