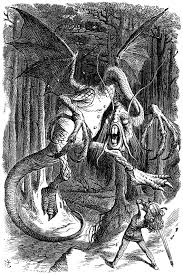 ‘Twas brillig, again, but the slithy toves were nowhere to be seen. And that wasn’t all. The borogoves were anything but mimsy, and the mome raths ingrabe. It was the most baffling case yet to have landed on the desk of Detective Captain Cargpan at the Pointy Town Police Station & Ice Rink.

Cargpan headed immediately to St Bibblybibdib’s church for Mass. He was a Roman Catholic so devout that he bore the stigmata, though in his case the marks were made by human rather than divine agency. He had had them tattooed on to his hands and feet and side. The tattooist, more accustomed to ornamenting the flesh of hairy leather-clad rock fans, had executed Christ’s wounds in the form of heavy metal umlauts. As a result, it looked as if Cargpan was displaying double stigmata, with the inference that he had suffered more than Christ. When accused of such blasphemy, the world-weary detective would reply “Perhaps I have, perhaps I have”.

After Mass, he went to confession. The priest, Father Tonguelash, was a keen student of the human heart, and Cargpan often relied on his insight.

“I am sore perplexed by this brillig case, Father,” he moaned.

“Moan not, my child,” said the priest, “For was it not the lately deceased psychopathic philosopher Manson who said ‘No sense makes sense’?”

Armed with this intelligence, and twenty Hail Marys later, Cargpan returned to his desk at the Pointy Town Police Station & Ice Rink. He immediately set about creating a filing system, of small rectangular pieces of cardboard shoved, alphabetically into a lockable metal cabinet. This was to be the artificial “brain” of the brillig case.

In the days following, Cargpan went to Mass several more times, smoked hundreds of cigarettes, and sat in his parked car next to the reservoir, gazing for hours and hours at herons and egrets and grebes and little grebes and a Jubjub. He turned over and over in his mind, in uffish thought, the words spoken by Father Tonguelash.

Somehow he knew that, as in a Scandinavian television series, the case would end with him apprehending a supremely clever and well-resourced serial killer, whose base of operations would be an abandoned warehouse on the outskirts of town, within which was a panoply of fearsomely complicated equipment and a fiendish plan laid out, photographs and diagrams and documents pinned up and spread over an entire wall, rather than kept neatly in a ring binder.

But before he could make the arrest, Cargpan had to identify the malefactor. Who was his manxsome foe? He sat by the reservoir as darkness fell.

And then, several impossibly blood-soaked murders later, on a frabjous day, the perp came whiffling and burbling through the tulgey wood. Cargpan was there to nab him. It was his Father Confessor, Ninian Tonguelash SJ!

In the next season of Cargpan, Detective Captain Cargpan is on the case of the so-called “Snark”, a serial killer who also turns out to be a (spoiler alert) Jesuit priest!