In a pioneering new work of social history, Dot Tint focuses her beady bluestocking eye â€“ through a lorgnette, we assume â€“ upon the Festival Of Argumentative Music At á¹ºlm. To be precise, she examines the first occasion on which the festival was broadcast over what used to be called the wireless, back in one of those years in the first half of the twentieth century.

In an age of apples and pods, it can be a bit of a strain for us to imagine the excitement generated by the news that peasants in far-flung hovels would be able to listen to the goings on live from á¹ºlm. Dot Tint writes: â€œWhen Â it was announced that the full programme of concerts, workshops, provocations and shouty stuff would be broadcast, there were outbreaks of mass hysteria in the countryside. Farmhands fainted in the fields. Hens acted weirdly in their coops. Wells were poisoned, and cows became fractious.â€

Many countryside wirelesses in those days were primitive pieces of kit bolted together from odds and ends of metal and wiring and bakelite panels. The fact that, as soon as one depressed the starter knob, they began to hiss and crackle and emit ear-splitting shrieks made them the perfect medium for listening to the racket from á¹ºlm.

The festival that year was devised by a singularly bad-tempered Teutonic hothead by the name of Klaus Krank. Dot Tintâ€™s pen-portrait of him includes the fascinating note that â€œeven the furrows of his tempestuous brows were themselves furrowed, deeply so, deep as the grave wherein my friend was laidâ€. She does not tell us who this friend might be, not even in a footnote, and I would have liked a footnote, given that the rest of her text is fairly riddled with them, sometimes two or three to a page, in tiny, tiny type, so tiny that I have had to crack the spine of my review copy to flatten it so that I can place it on a platen and view it through the lens of a large important industrial magnification instrument. It might be argued â€“ it has been argued â€“ that I would be better off getting my eyes tested and wearing a pair of prescription spectacles, or contact lenses, but why the hell should I? I see no reason to be cowed by the gradual, inevitable dilapidation of my physical self, by the relentless withering away of my senses. I shall fight that dereliction with every atrophying fibre of my being, and, where necessary, with large important industrial magnification instruments. Like Dot Tintâ€™s unnamed friend, I too will one day be laid in a grave as deep as the furrows, or rather the secondary furrows, of Klaus Krankâ€™s mighty brows, and until that time comes I shall simply refuse, in a booming voice, to be extinguished. As the poet Dennis Beerpint wrote, â€œDo not prance winsomely into that grave / Rage, rage against the [something], Daveâ€ in his verse Lines Upon The Imminent Death Of Dave, My Pet Viper.

Beerpint was not yet born when the Festival Of Argumentative Music At á¹ºlm was first broadcast on primitive wireless sets. One wonders how he might have tackled a commission to write a threnody for it, to be set to music by one of Klaus Krankâ€™s hotchpotch collection of composers, each outdoing the others in misanthropy and general grumpiness. Yet theirs was a grumpiness of a very earnest, serious-minded sort, and they wrote music to match. The lucky peasants who tuned in to the wireless in their windswept fenland hovels were treated to such masterworks as Six Bagatelles Upon A Windswept Fenland Hovel by Von Straubenzee, The Drainage Ditch Variations by Ack, and Lullaby For A Cow Felled By Ergot Poisoning by Ergott.

The great value of Dot Tintâ€™s book is that she makes explicit the link between the confrontational nature of much of the music and the violent altercations between Klaus Krank and the composers and the ticket sellers and the security patrols and the audience and the paramedics and the wireless engineers and the dog handlers and the piano detuners and the ratcatchers and the festival docents at á¹ºlm. Not only that, but she puts it in the wider context of Uruguayan political intrigues of the time. She blithely dismisses the predictable objection that á¹ºlm is not even on the same continent as Uruguay in prose that glistens like a jewel. She even appends a picture of such a jewel, in the form of a mezzotint by her brother, the noted mezzotintist Rex Tint.

It is one of several such mezzotints in the book, which also contains a small selection of photographs. The one reproduced below purports to show Tiny Enid, Mrs Gubbins, and Old Farmer Frack listening to the broadcast of Klaus Krankâ€™s own Festival Overture For Cello, Pots And Pans, And Electronically Modified Corncrake, but this cannot be right, as the three of them are known never to have occupied the same time and space upon this or any other planet. Dot Tint confirms as much in a highly amusing Erratum slip inserted into my copy of the book. 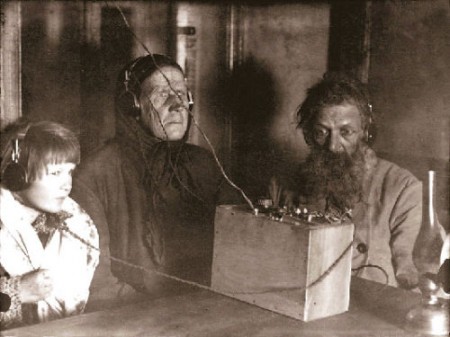