Letters have been pouring in from readers eager to make their own putti, wondering how to go about doing so. Here, for example, is Tim Thurn:

Dearest Frank, he writes, in his overfamiliar way, I am eager to make a putto of my own, but have absolutely no idea how to go about it. Can you offer any tips to a cack-handed reader whose previous efforts at craft projects have ended in disaster? Passionately yours, Tim.

The first thing I will say is that cack-handedness, in and of itself, should never deter a Hooting Yard reader from undertaking any craft project, however complicated. As M People put it so eloquently, “you’ve got to search for the hero inside yourself”. Do you think for one minute that heroes such as Ulysses or Tristram Shandy or Watt would have shrunk from the challenge of putto-making, had they had to face it? No, they would not. So stop whimpering and just get on with it.

To make your own putto, it is absolutely imperative that you first acquire a grounding in the art of the Renaissance. In fact, you need more than a grounding. Ideally, you should be able to triumph over Bernard Berenson in a quiz on the subject. Berenson has been dead since 1959, so to prove your mettle you must consult a backstreet medium and have him or her summon the shade of Berenson from the Other Side. Apart from their immense knowledge of things past, present, and to come, spectral beings from beyond the grave can be surprisingly quick on the buzzer in tense quiz-type situations, so you should get in some fairly hefty practice. Tecwen Whittock, whose coughing prompted correct answers from Major Charles Ingram in the great Who Wants To Be A Millionaire? cheating affaire of 2001, and was himself a contestant on the show, built his own homemade four-button console and rehearsed on it for hours. This is the kind of preparation you would do well to imitate before facing the spirit of Bernard Berenson in a Renaissance art quizathon.

Having, I hope, crushed the shade of Berenson and demonstrated your sweeping knowledge of the subject, you will now be in a position to make your own putto. Get some putty, mould it into a putto, give it a lick of paint, and voila!, there you have it. One reader who tried this out was OutaSpaceman, and here is the result: 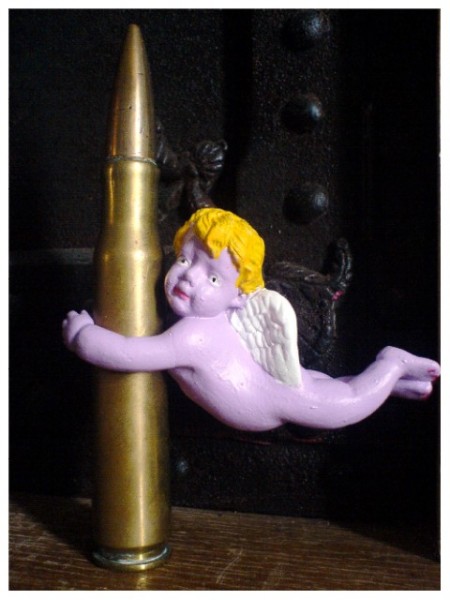 If you wish to make edible putti, for the decoration of cakes and pastries and so on, you can use dough instead of putty, and food colourants instead of paint. A generous slice of chocolate swiss roll upon which a pair of dough putti are disporting themselves makes the perfect addition to a worker’s lunchbox, and is said to aid productivity on the factory floor, according to the nutritionist Catnip Wedge. Wedge has been dead even longer than Bernard Berenson, but he proffered his opinion when his phantom, bespattered rather disgustingly with an excess of ectoplasm, was summoned by Madame Boubou, the backstreet medium I consulted.