Devoted Hooting Yard readers will know that I am always on the lookout for boosters of one sort or another. I don’t really care what kind of booster it is, nor what it is designed to boost. It is entirely possible that my enthusiasm is stirred simply by the sound of the words ‘boost’ and ‘booster’. Broadly speaking, I would aver that you can’t go wrong if your sentence has ‘boost’ in it somewhere, even if it doesn’t make sense. A while ago I employed a team of boffins to analyse the neurological responses of a sample of listeners to my radio show. The results, though difficult to clarify, buried as they were in a vast pile of inexplicable data, showed that magnificently pleasurable brain-tinglings occurred in seven out of ten people, irrespective of age, gender, ethnicity, sock-size, religious or political affiliation, or the angle of the ears towards their wireless sets, whenever I declaimed in sprightly tones the words ‘boost’ or ‘boosters’. Further tests showed that the remaining three out of ten persons each had so-called “boffin-resistant brains”. Apparently the cranial integuments of such persons send out weird wild rays or beams of some unknown substance which thoroughly beflummox the dials and chockers on the boffins’ conical scanners.

Anyway, I make mention of all this because, during my stay in Flanders, I could barely walk ten paces upon the cobbles without seeing this excellent example of booster-related advertising. 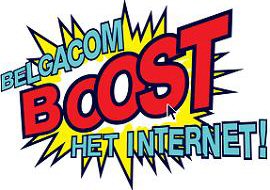 I am not sure whether Belgacom boosts anything else, in addition to het internet, but I wouldn’t put it past them.