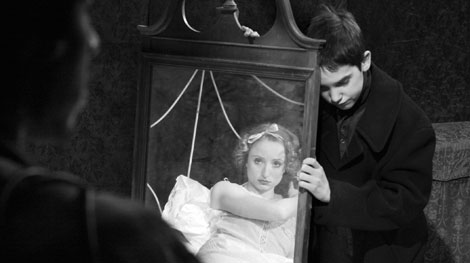 There are two films I adore without reservation. Both of them have been constant guiding influences on me, either consciously or in more subtle ways. One of them, Jacques Rivetteâ€™s Celine And Julie Go Boating (1974) I have seen umpteen times, whereas the other, Peter Greenawayâ€™s A Walk Through H : The Reincarnation Of An Ornithologist (1978), I saw once shortly after its release and only again last year.

Of course there are dozens, or hundreds, of other films I have relished over the years, from Brief Encounter to Aguirre, The Wrath Of God, from Love And Death to Random Harvest, but somehow those two have been my touchstones. I saw them first when I was young, and they opened up new imaginative possibilities to me. It would not be true to say that I havenâ€™t been bowled over by a film since then, rather that I canâ€™t think of one that has given me precisely that sense of wide-eyed surprised gleeful imaginative abandon.

Until yesterday, when I went to see Brand Upon The Brain! by Guy Maddin. Hooting Yardists will need only to know that the film takes place in a lighthouse orphanage on Black Notch island, that the characters include a harp-playing teenage detective and an evil boffin in his underground lab, and that communications are made via aerophones and a foghorn, to understand my enthusiasm.

Here is Andrew Sarris in The New York Observer: â€œBrand Upon The Brain! succeeds at one and the same time in functioning as both a celebration and a deconstruction of the conscious and unconscious glories of silent movies through the barely thirty years of their existence at the beginning of the 20th century. Let us say simply and definitively that I have never seen anything like it. The pace of the twelve chapters, told over the course of ninety-five minutes, surges along, propelled by the archaic silent-movie storytelling device of intertitles coupled with a faux-naif verbal narrationâ€¦[it] is one of the most compelling avant-garde excursions into the narrative cinema ever.â€

Apparently the film is to be released on DVD next month, so everyone should buy a copy. It is a work of genius.

3 thoughts on “Brand Upon The Brain!”