I am the hermit of the dingly dell. Ach God!, it is the dingliest of dells. That is why I chose it for my hermitage. Its glades and dingles are abundant with those things which provide for a hermit’s simple needs, such as nuts and fruits and rills of fresh water. Every now and then, in a rill, a fish might swim by. Deploying my net with practised skill, I catch the fish. Then I will sit before a fire toasting the fish upon a fork, my hand raised to sleet and sun, my shoes doffed to oblivion, like the hermit in the song by the Art Bears, himself inspired by the hermit carved in stone on the stylobate of the cathedral in Amiens. 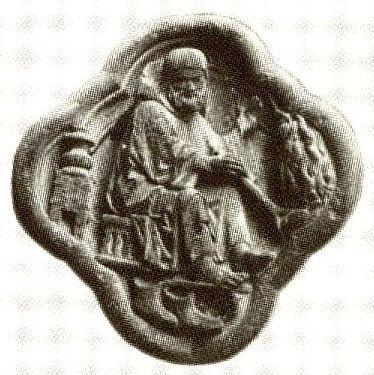 I have considered carving myself in stone, to pass the time in the dingly dell, but I do not have the proper tools. I suppose I could rub and rub at a pebble, every day, persistently, and carefully, for years, but even then it would be very difficult to get the proper finish. Still, it is a project I might yet embark upon, for the days and nights are long in the dingly dell, and once I have gathered my nuts and fruits of a morning, and made a note of the reading on the rain gauge hanging from a branch of the mighty laburnum, I must always be on my guard against the devil, who, we know, makes work for idle hands.

The devil has appeared to me in many guises since I came to my hermitage in the dingly dell. At first he took the form of a vaporous mist. This suggested to me that his powers were weak, and I laughed at him, loudly, waving my arms about to disperse him. But then he grew able to inhabit solid forms, albeit tiny ones, such as an ant or a twig. Lately things have entered a dangerous phase, for the devil has entered the body of a squirrel, and the dingly dell is teeming with squirrels. Shunning the company of my kind, as I do, being a hermit, I have learned to commune with squirrels, but now I must shun them too, or risk engaging with Beelzebub himself.

Were that to happen, I might be forced to take refuge in the dingly dell hotel. In the normal run of things, of course, I avoid it. Sometimes, while gathering my nuts and fruits, I come close to the hotel car park, and hide behind a shrub. I have seen the major domo of the hotel striding purposefully across the car park, even making his way into the dingly dell itself, where he stops and sits on a log and smokes a cigarette. This is disturbing, but I am not so neurotic as to think he is in league with the devil, even though squirrels do approach him, tentatively, hoping perhaps for a nut or two. But the major domo is not a man for nuts, he just smokes his cigarette, and occasionally taps out messages on a Blackberry. Not the kind of blackberry I would have for my supper, after some toasted fish, I should add. His is an electronic device, which beeps from time to time while he smokes. It is most irritating, but I dare not rush out at him from behind my shrub and snatch the thing from his hands and stamp upon it until it is crushed to smithereens, which is what I would like to do. For if I did that, I would betray my presence in the dingly dell, and it would no longer be my hermitage. I would probably have to talk to the major domo, to explain myself, and I am not sure I can remember how to speak in a way that is understood, unless I am speaking to a squirrel.

And until the devil shifts shape, I cannot even talk to the squirrels. What is to become of me, here in the dingly dell? I shall make a note of the registration plates of the cars in the hotel car park, and compare the numbers with the readings from the rain gauge, to discover if there is any correlation. That will pass the time, and be more diverting than going rub rub rub at a pebble, and eventually the devil will tire of being a squirrel, and turn into something else. He will never outwit me, for I am the hermit of the dingly dell, buster!

One thought on “The Hermit Of The Dingly Dell”