She was a plucky tot, a heroic infant, and a little fascist… but was Tiny Enid also a feminist pioneer? On the face of it, the answer to that question seems self-evident. How else would one describe the club-footed young gal, pootling about in her clapped-out jalopy, puffing away at cheroots, essaying deeds of matchless valour, and giving a variety of malefactors a good kicking? Yet such were the constraints imposed by society on what was deemed seemly, Tiny Enid oftbetimes made great pretence of being a helpless weedy flibbertigibbety waif, ready to swoon away or throw a fit of the vapours. Sometimes she put on such a show even while performing one of her brave deeds. In this picture, for example, it looks as if Tiny Enid is about to topple from a hot air balloon basket, and is being saved by a pair of tender-hearted ruffians. She is, of course, acting out the part expected of her in a patriarchal culture. What is actually happening here is that Tiny Enid is cleverly distracting the ruffians – card-carrying members of the Communist Party, no less! – for, moments after the sketch was completed, she was back in the basket, her big black boot stamping on the neck of one ruffian while the other flung himself overboard in a cowardly escape from the tot’s righteous wrath. 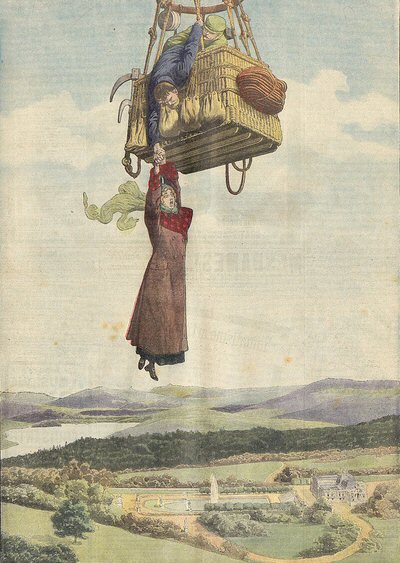