I have been called many things in my time – “Mr Key” and “a Diogenesian recluse” are two that spring to mind – but the one I particularly treasure is “the anti-Capitalist Music journalist”. Alas, the tiny speck of Interwebshire where these words appeared has vanished. Let us hope it pops up again somewhere one day.

Capitalist Music were an endearingly preposterous band, based in Norwich, in those heady post-punk days circa 1979-1982. Their chief characteristic, as I recall, was an almost boundless self-importance. For the crime of having given them a so-so review in a local rag, I earned my immortal epithet. Not “an” anti-Capitalist Music journalist, note, but “the” (as if they were otherwise universally adored), and the implication that my opinion of them was the defining fact about me. I may have been scribbling reviews of other bands, and of films, and bashing out a cartoon strip, but what did that matter? Surely everybody knew me as “the anti-Capitalist Music journalist”.

But was I, truly? After all, here I am writing about them thirty years later. The reason for doing so is basically a plea for help. For me, the band’s finest work was the ludicrous “Jane’s Gone To France”, with its rousing lines “It’s the land of cheese and wine / It’s the land of Marshal Petain!” Yet no matter how efficiently I sluice out my ears with Dr Baxter’s Ear-Sluicing Preparation, I have never, ever been able to work out what on earth the great Steve Bloch is singing in the next line. So in a desperate attempt to solve this puzzle that has haunted me for three long decades, I am posting the song here. Have a listen, and when you have calmed down sufficiently, and stopped giggling, do let me know what you think that line is.

It’s the land of cheese and wine

And it’s the land of Marshal Petain

She was a good girl

But now she’s gone for good

from the 1981 compilation album “Welcome To Norwich A Fine City” 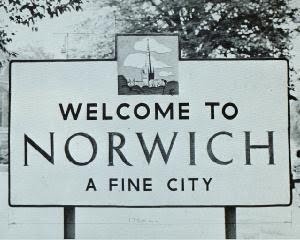 12 thoughts on “The Land Of Cheese And Wine”