“Depressed horse never knew saucepans” reads the legend on intervention number 187. Where had I heard those words, in that order, before? Was it the title piece in a slim volume of twee verse by Dennis Beerpint? Was it a chapter heading from a bestselling paperback potboiler by Pebblehead? Or could it be the code phrase uttered by international woman of mystery Primrose Dent to gain access to her secret subterranean headquarters?

Luckily, there are reference books where one can look up this sort of thing, so I looked them up. That is, I looked up Beerpint and Pebblehead and Primrose Dent, in a biographical reference book, but grew none the wiser. I then consulted reference works on depression, horses, and saucepans, still to no avail. Yet the words continued to swirl around in my brain, their origin tantalisingly out of reach.

Previously on Hooting Yard, as they say in the American television series, when faced with such quandaries I have stalked off into the deep dense dark woods of Woohoohoodiwoo and sought the counsel of the Woohoohoodiwoo Woman. That freakish crone is a dab hand in the arts of recovered memory syndrome, and more than once she has brought bubbling to the surface of my cranium material which might otherwise have remained forever obscure and buried. On this occasion, however, my people learned from her people that the Woohoohoodiwoo Woman had gone on her holidays, to some benighted and dilapidated seaside resort, to suck sticks of rock and commune with seagulls in bird-language from the balcony of her seashore chalet. It came as something of a surprise to me to learn that the eldritch hag took holidays, like normal people do, and as I am ill-equipped to deal with surprises of any nature, I took to my bed for forty-eight hours, tossing and turning and whimpering weakly, as illusory phantasms gambolled and frolicked across the ceiling of my boudoir. The boudoir adjoins the fustiparlour, and by keeping the door open I was able to peer at the piece of cardboard propped against the empty cardboard box upon which I had logged the details of intervention number 187, including, of course, those haunting words.

By the time I was ready to face the world again, I had resolved to try to forget all about the depressed horse that never knew saucepans. The first step in my forgetting was to put the piece of cardboard back in the cardboard box where all my cardboard signage loggings were stored, but I made the mistake of preparing a snack before so doing. It was not the cream crackers which unhinged me, as they have done before. No, it was the processed cheese triangle I took from the refrigerator, intending it as an accompaniment, to be spread upon the cream crackers with a spatula. I did not even get as far as unwrapping the processed cheese triangle, transfixed as I was by the illustration, on its wrapper, of a laughing cow. Perversely, perhaps, the sight of a happy cow made me think immediately of a depressed horse. I replaced the processed cheese triangle, unopened and uneaten, in the refrigerator, and shovelled the cream crackers into my mouth one by one, chewing them to a pulp, and reflected sadly that until I could discover where in the name of all that is holy I had first encountered the words “Depressed horse never knew saucepans”, tormented me would never know rest.

You will be familiar with the phrases “barrack-room lawyer” and “pub philosopher”. Well, later that day I fell into conversation with a milk bar Jesuit. He had the appearance, character, mental agility, wiliness, black soutane, and fanatical religious commitment of a Jesuit, yet he was a mere habitué of the milk bar into which I popped to get a glass of milk with which to wash down my dry cream cracker snack. He was sitting at a table, drawing on it a line with a piece of chalk, as if he were about to mesmerise a duck, a Jesuitical trick once practised, on the twenty-seventh of April 1871 by Gerard Manley Hopkins, an actual Jesuit. There were no ducks to be seen in the milk bar, however, and when he invited me to sit at the empty place opposite his, I accepted. With his pincer-like brain he rapidly grasped that I was a troubled soul, and before the milk bar skivvy had brought me my glass of milk, I found I was pouring out those troubles.

“It is good that you did not stray down a pagan path by unburdening your soul to the Woohoohoodiwoo Woman in the deep dense dark woods of Woohoohoodiwoo,” he said, when I had finished telling the tally of my woes, by which time my milk had arrived, in a smudged and greasy glass.

“It seems to me,” he continued, “There are two ways to approach the problem, if problem it is.”

“Oh?” I asked, between slurps of milk.

“First, it could be that the laughing cow on the wrapping of your processed cheese triangle holds the key to the conundrum. It is certainly worth investigating the possibility that there exists, somewhere, on this continent or one of the others, a manufacturer of saucepans whose emblem is a depressed cow. Find that manufacturer, and you find the source of the phrase that haunts you!”

I nodded my agreement, but protested that I had already consulted a huge number of reference books without coming upon a mention of any such saucepan manufacturer. He chuckled Jesuitically.

“Well, no work of reference is truly exhaustive, not even the Bible,” he said, “Though that would be a good place to start. In the King James Version, for example, there are forty-three mentions of ‘horse’ and one hundred and nine of ‘horses’. And while it is true that one will search in vain for the words ‘depressed’ and ’saucepan’, it would be well to follow up the one hundred and six instances of ‘woe’, the twenty-two of ‘pot’ and the fifteen of ‘pots’. I would aver that the difference between a depressed horse that never knew saucepans and a woebegone horse that never knew pots is purely academic.”

I was about to express my surprise that a Jesuit would call on the authority of the King James Version rather than, say, the Douai Bible favoured by Catholics, but then I recalled that he was only a milk bar Jesuit, not a real one. It also occurred to me that, surprised as I was, if only momentarily, I remained eerily calm, and in no danger whatsoever of having to collapse back into my bed for a further forty-eight hours.

“You said there were two ways to approach the problem,” I said, “What is the second?”

“I hope your question does not indicate that you have dismissed out of hand my recommendation that you seek the answer in the Holy Book?” he rapped back.

“No,” I said, “I shall track down all the woe and horse and pot references as you suggest. But it’s fair to say I don’t hold out much hope.”

“Very well,” he said, steepling his fingers together, as if in prayer, and resting his chin upon them, “The second approach is as follows. Look carefully at these lines in chalk I have drawn upon the milk bar table.”

I did so – and was mesmerised, just like Hopkins’s duck. And it was while I was thus entranced that the milk bar Jesuit vouchsafed to me the reason for my nagging sense that somewhere before I had heard, or read, the words “Depressed horse never knew saucepans”.

Laughably, my first surmise had been almost correct. It was the title of a Dennis Beerpint poem! But the title of a poem the weedy poetaster had not yet written, nor even conceived within that frothing poetic brain inside his head! How then could I already know it? Well, when he snapped me out of the trance, the milk bar Jesuit revealed himself as an aficionado of Beerpint, my compadre in that little fellowship of admirers whose buzzings and twangings on the so-called Beerpintosphere keep track of everything, yes, everything even tangentially relevant to the poet and his doings, even his dreams. Dennis Beerpint had dreamed of writing a poem entitled “Depressed horse never knew saucepans”, and I had dreamed of his dream, and someone else had buzzed or twanged my dream on their own Beerpintoblabberblob. At last it all made sense!

I drained the last mouthful of milk from my glass, stood up, and bid the milk bar Jesuit farewell. As I crashed out of the door into the street, I saw, in the distance, a duckpond. Several ducks were waddling their way slowly towards the milk bar. It seemed there were to be further mesmeric revelations before the day was done. I smiled at the thought, quite unlike a depressed horse, and headed for home, and my laughing cow. 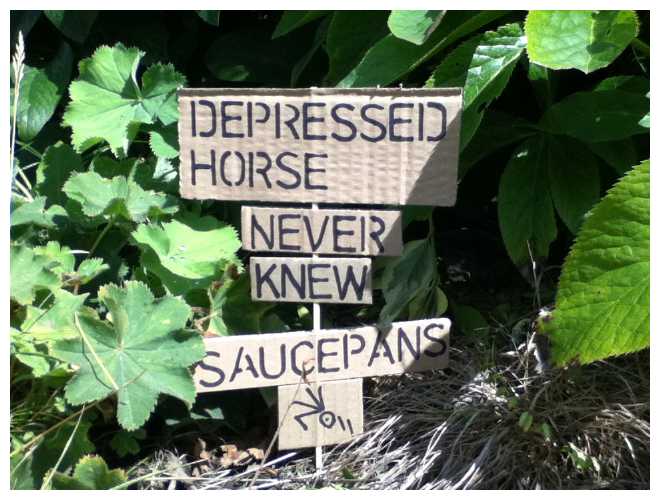