Scene One. Toyah’s so-called “Yoko House”, a property devoted entirely to storage of archives and memorabilia of her glittering career. Toyah is sorting through a pile of old videotapes of her appearances on Top Of The Pops, three decades ago.

ROBERT FRIPP : Not yet, my dear, not yet.

Robert Fripp passes a hand over his startlingly intelligent forehead, momentarily overcome by the weight of his responsibility.

ROBERT FRIPP : I can’t come up with something as fantastic as Frippertronics every day, sweetie.

TOYAH WILCOX : I don’t thee why not. You jutht took a thimple feedback loop thing already practithed by many experimental guitarithtth and called it Frippertronicth with your wonderful modethty. I’m thure there are thome other techniqueth lying around that you could altho lay claim to.

ROBERT FRIPP : (sighing) I don’t know. Sometimes I think my gigantic brain has taken the electric guitar as far as it can go. Perhaps I need a brand new field to which I can devote my pulsating intellect.

Scene Two. The executive boardroom of Cakes R Us, a major player in the cake manufacturing industry. Patricia Fripp is addressing the assembled executives.

PATRICIA FRIPP : OK, still the hubbub! I know I have been described as “one of the ten most electrifying speakers in North America”, but right now you have to stay calm and concentrate on cake sales figures. Let’s kick some ideas around the flagpole and push envelopes into a box. Brainstorm, guys!

The executives brainstorm in various little grouplets or “idea silos”.

ROBERT FRIPP : Will do, poppet, just as soon as I have finished cogitating.

The telephone rings. Toyah picks up the receiver.

She listens for a while and then puts the phone down.

ROBERT FRIPP : You mean I should cast aside the electric guitar and devote myself to innovations in cake-selling?

ROBERT FRIPP : It would certainly give me a whole new area to which to apply my giant egghead brain! I must go and see Pete Sinfield at once!

Scene Four. The palatial residence of Pete Sinfield, whose lyrics have been intoned by top prog artists such as King Crimson, Emerson Lake & Palmer, Leo Sayer and Bucks Fizz. Pete is sitting at an escritoire, writing the lyrics for a pop song with a quill upon parchment.

PETE SINFIELD : Hello, Robert. It’s a good job my residence is palatial, with huge doorways wide enough for your superb bespectacled egghead to fit through.

ROBERT FRIPP : I need some lyrics about cake for my new project.

PETE SINFIELD : Hmm. Let the Muse descend. “The lady in white robes floats o’er the mystic lake / And on the wind are borne towards her many sorts of cake”.

Scene Five. A countryside fete, somewhere in England. Inside a marquee, beside a sign bearing his wife’s name, Robert Fripp proffers a tray of cakes to passers-by.

ROBERT FRIPP : Roll up, roll up. These aren’t just cakes. They are an entirely new teatime snack I call Frippocakeys.

TOYAH WILCOX, PATRICIA FRIPP, & PETE SINFIELD (looking on in awestruck admiration) : Truly, Robert Fripp has brought something entirely new and original to the world of cakes. 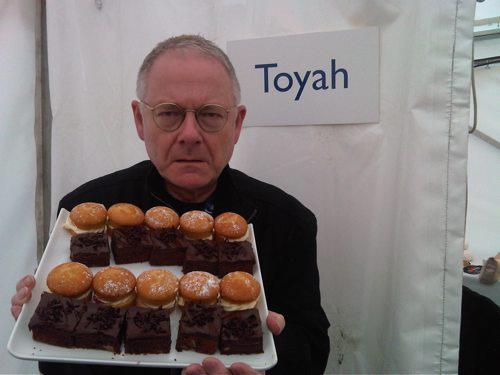 Thanks to Marina Organ for alerting me to this superb photograph.