The first problem is that I am not sure there actually is a Poultry Guidance Bureau in my bailiwick. Certainly I have been unable to find any evidence of one. The second problem, related to the first, is that I do not quite know what a Poultry Guidance Bureau is or does. “Poultry” and “Bureau” are clear enough, but the “Guidance” bit has me baffled. Are we talking about some sort of counselling service for distraught chickens? Or is the guidance more literal, involving directional pointing devices showing hens the way from their coop to… I don’t know, to wherever else in the farmyard they have urgent hen-business to attend to. Can hens read simple directional pointing devices?

It might be that the Bureau, despite its name, isn’t for the guidance of poultry at all, but for the guidance of humans in their interactions with poultry. I can understand that that might be a useful service. After all, if you presented me with several chickens, squawking and pecking, I doubt very much if I’d have the faintest idea what to do with them, at least on an immediate basis. I suspect I might panic if I found a peep of chickens or a bevy of quail abandoned on my doorstep by a feckless farmer. I can well imagine how reassuring it would be, in such a circumstance, to have a hotline to the Poultry Guidance Bureau. Even if my initial surmise was correct, and the Bureau was a counselling service for poultry, I presume they would send an outreach worker to placate the poor abandoned chickens and quail, which would be rampaging around my living room making an unholy mess. Well, I could hardly just leave them on the doorstep, could I?

Obviously I am going to have to ascertain the precise nature of the Poultry Guidance Bureau’s business before I can make a proper fist of the Art Squad. It might be, for example, that our art will consist simply of beautifully-painted directional pointing devices, designed to appeal to the optic nerves of poultry, in which case I will just need to gather about me a bunch of sign-painters. On the other hand, we may need a team of actors to facilitate role-playing exercises for traumatised hens as part of the counselling service. Or, if the Bureau is indeed mainly for human benefit, then an oompah band playing stirring anthems might be more appropriate, although having just written that I can’t think why.

All things considered, my best bet is to assemble a crack squad of sign-painters, actors, and oompah band musicians, together with a few practitioners of other arts, just to be on the safe side. We can then devise and rehearse an arts squad praxis to present as a fait accompli to the nearest Poultry Guidance Bureau, when, that is, we manage to track it down in its lair.

There is at least one thing we can be clear of, and that is what top class poultry art looks like. Some years ago we were pleased to feature this splendid painting by Emma Watts, originally published in Mustard Plaster. 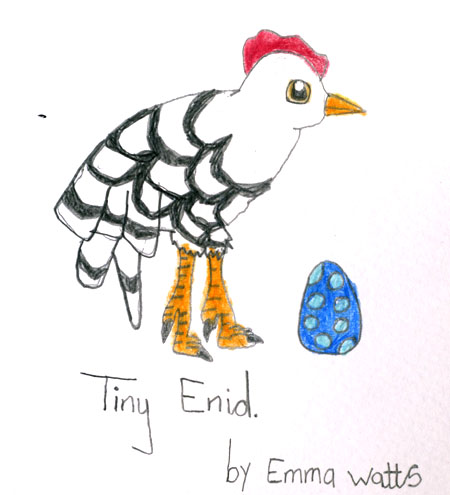