They say the devil is in the detail, but is that a fact? I decided to find out. First of all, though, I wanted to have a better idea of “the detail”. I was pretty sure I would know the devil when I saw him, but somehow, paradoxically perhaps, “the detail” seemed a more nebulous entity. So I turned, as always, to the Oxford English Dictionary, which, for its main definition, has this to say:

The dealing with matters item by item; detailed treatment; attention to particulars. Esp. in phrase in (†the) detail , item by item; part by part; minutely; circumstantially. So to go into detail , i.e. to deal with or treat a thing in its individual particulars.

Fair enough. That gave me somewhere to start. If the detail is a minute individual particular item of a thing, what better way to test the thesis than by taking something apart, bit by bit, until the devil in all his evil burning foulness is found, lurking within – or not, as the case may be?

The next step was to choose something to dismantle. Now, it must be said that I am not the most dexterous of chaps. On the contrary, I am a bit of a butterfingers. Dangling on string from the ceiling of my boyhood bedroom were many, many Airfix model aeroplanes – Spitfires and Stukas and Messerschmitts and Sopwith Camels and Boeing 747s and Parker Double Teenies and Harrier Jump Jets and so on – all expertly fitted and glued together and their insignia transfers impeccably transferred, but all these were constructed by my older brother, with whom I shared a room until I was about ten or eleven. I think I tried, at least once, to emulate him, but the resulting plastic plane did not turn out well. As I recall, the only successful model I made was a cardboard head of Henry VIII, cut and folded from a template printed on the back of a Kellogg’s Cornflakes carton.

It occurred to me that I could just smash something to bits, for generally speaking violent smashing requires not dexterity but gung ho and a big hammer. Tempting though this was, however, I felt it would be going against the spirit of the project. I am not sure that fragments and smithereens count as “details” according to the dictionary definition. No, I must be methodical, and pick something apart piece by piece, neatly aligning the individual parts on a suitable surface such as a baize cloth laid out and flattened smooth upon a tabletop. Green baize would make the most suitable background to contrast with the gaudy scarlet hue of the devil, were he indeed to be hiding in the detail.

After much reflection, I had a brainwave. I was sitting there staring glumly out of the window at some crows, humming and hawing whether to dismantle an alarm clock or a bicycle pump or an orrery, when it struck me that of course the simplest thing to take to bits would be something that was child’s play to put together in the first place. Child’s play, literally. I scampered off to a toyshop and bought a Mr Potato Head.

For those of you who have put away childish things (First Epistle of Paul to the Corinthians, 13 : 11), and put them away so decisively that you can no longer remember who, or what, Mr Potato Head is, let me remind you. Mr Potato Head is an American toy consisting of a plastic model of a potato which can be decorated with a variety of plastic parts that can attach to the main body. These parts usually include ears, eyes, shoes, a hat, a nose, and a mouth. The toy was invented and developed by George Lerner in 1949, and first manufactured and distributed by Hasbro in 1952. The toy was originally produced as separate plastic parts that could be stuck into a real potato or other vegetable, such as a parsnip or turnip, or even a fruit such as a clementine or a Carlsbad plum. Before leaving the toyshop with my purchase, I checked to see that the model was sold in its constructed state, rather than as a jumble of bits. It would be pointless for me to have to put it together before dismantling it, and in any case, if the devil is in the detail then he would likely be visibly evident within the Mr Potato Head packaging box, his goaty horns and perhaps his pointy fork poking holes in the cardboard or cellophane.

Back home, I took Mr Potato Head out of his box and set him on the green baize cloth upon the tabletop. Was that a whiff of sulphur I smelled? It might have been. Perhaps the devil sensed I was closing in on him, and was giving off hellish vapours in his panic. Thereagain, would the devil panic at being discovered in the detail? He might, rather, be gleeful at being unloosed. I had not thought of that. I sniffed again, and took a very careful look at Mr Potato Head, seemingly so innocent upon the baize. Was I about to take an awful, irrevocable risk? Was I about to unleash Satan from his bondage?

I gazed into the eyes of Mr Potato Head and asked myself, was I being criminally reckless, playing taradiddle with the fate of nations, just to prove or disprove a familiar saying? Was there not an easier way? I came to the conclusion that I have not studied demonology with sufficient intensity to answer the question. And that is why I have made an appointment to see Father Ninian Tonguelash, the Jesuit exorcist, to seek his advice, and why Mr Potato Head is still sitting, all his constituent parts connected, undismantled, upon the baize. 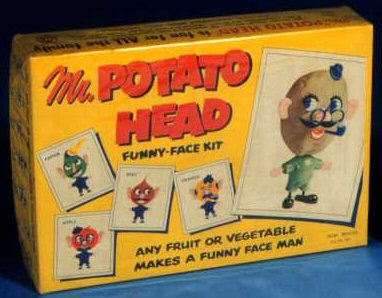 2 thoughts on “On The Devil In The Detail”