Today is a special day at Hooting Yard. We leap out of bed before dawn, we do our ablutions, and we tuck into breakfast, eschewing the usual eggy fare for a big pile of waffles. Then we take a bow and a quiver of arrows, throw open the window, and send the arrows flying into the air, taking care to avoid any moving bird targets. For today we celebrate the birthday of Belgian archery ace Hubert Van Innis.

Had he lived, Van Innis would be 146 today. As it is, he lived to the ripe old age of 95, a pretty fair whack when you consider the dangers inherent in the sport of archery. Stand in the wrong place, even for a moment, and you could be impaled by an arrow launched by one of your competitors, or even by one of your team-mates. Most archers are sensible enough not to go and stand between another archer and the target, but it can happen. Or it may be that a fellow archer is maddened, for example by a buzzing within the head, and begins to fire arrows indiscriminately, in directions other than that of the designated target. One of these stray arrows could well strike you, if you had not been alerted to the fact that the maddened archer had gone doolally, and you had thus not run for cover behind the nearest bale of hay. Again, such incidents are rare, but nevertheless possible.

Luckily no such tragedy cut short the life of Hubert Van Innis, and he died peacefully in his bed, to the best of my knowledge, in November 1961. Decades had passed since his triumphs in the Olympic Games, when he won six gold and three silver medals between 1900 and 1920. Three of these medals were for arrows fired at moving bird targets, at distances of twenty-eight metres and thirty-three metres (both gold, 1920), and fifty metres (silver, also 1920). Perhaps Van Innis did so well that year because he was on his home turf, in Antwerp. Incidentally, as I have already made clear, here at Hooting Yard, when we fire our celebratory early morning Hubert Van Innis birthday arrows into the air, we take care to avoid moving bird targets. Actually such avoidance is fairly easily accomplished, what with the speed and swooping trajectory of birds in the sky. It is quite difficult to hit them.

In addition to his aptitude for firing arrows with pinpoint accuracy at moving birds and other targets, Hubert Van Innis set new standards for sartorial elegance within the Belgian archery community. 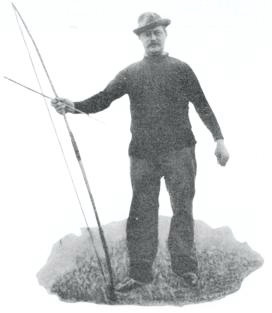 This is a “look” to which we can all aspire, whether or not we are brandishing a bow and arrow. Dressed à la Van Innis, one can sashay along the city boulevards full of confidence and élan, and not just in Belgium. One can also profitably sport this apparel in non-urban settings. It goes equally well in flat, canal-criss-crossed terrain such as one finds in the Low Countries, and in mountainous regions such as the Swiss Alps. Speaking of Switzerland, one recalls the legendary Swiss archer William Tell. I am afraid I do not know if Hubert Van Innis ever shot an arrow at a piece of fruit balanced on the head of his son, nor even if he had a son on whose head a piece of fruit could be so balanced, but I have no doubt that, if such a son existed, and if Van Innis balanced a piece of fruit on his head and then took some paces back, to stand at a distance of, say, twenty-eight metres or thirty-three metres or fifty metres, the distances from which he fired arrows at moving bird targets at the 1920 Olympic Games in Antwerp, he would have successfully split the piece of fruit in two with his arrow without harming a hair on his son’s head, the head on which the piece of fruit was balanced.

According to Space Station Plaza, the Galactic Harmonizer which connects people using the Dreamspell 13-Moon Natural Time Calendar and promotes universal peace and galactic harmony with Mayan cosmology, Hubert Van Innis was both of the Red Galactic Earth and the White Cosmic Worldbridger types. He was thus in both the Wizard and Dog wavespells. I cannot say I am surprised by this information, as it seems to fit neatly with what we know of his career as a tiptop medal-winning twentieth century Belgian archer.

Though Van Innis remains the most successful archer in Olympic history, we ought not forget the compatriots who fired arrows alongside him in Antwerp in 1920. Edmond Cloetens, Jerome De Maeyer, Firmin Flamand, Joseph Hermans, Louis Van De Perck, and Edmond Van Moer also took part, and to the best of my knowledge not one of them was maddened by a buzzing within the head and went on the rampage, firing arrows indiscriminately and thus imperilling their fellow archers or the watching crowds. On the other hand, none of them lived as long as Hubert Van Innis, and further research will have to be undertaken to ascertain how they met their deaths, and whether any of them were felled by stray arrows during archery accidents.

2 thoughts on “On Belgian Archery”