Today is Saint Patrick’s Day. Around the world, persons of Irish heritage – often extremely tenuous – will find in the feast day an excuse to get drunk and sing mawkish songs, and to generally engage in what they laughably call a craic. I am of Irish heritage myself, on my father’s side, but view the sentimental attachment to the Emerald Isle with contempt, so instead of glugging Guinness and tunelessly wailing “O Danny Boy” with tears coursing down my cheeks, I shall turn my attention to ants.

For today we also celebrate the birthday of Horace St John Kelly Donisthorpe (1870-1951), one of the greatest of British ant experts. Independently wealthy, by dint of the family textile business in Leicestershire, Donisthorpe went to the University of Heidelberg to study medicine, but left before qualifying due to a “too sensitive nature”. From the age of twenty, he devoted the rest of his life to the study of ants and beetles. 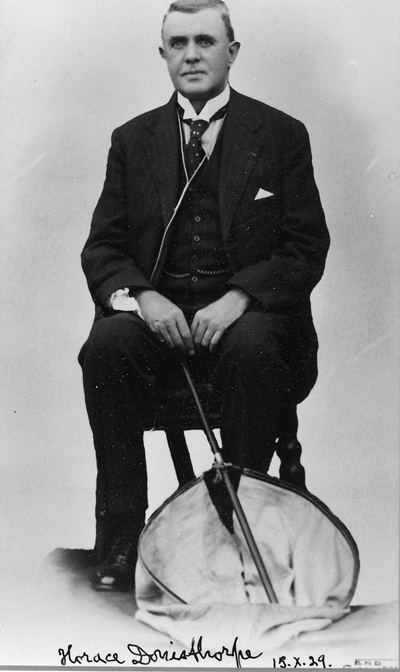 Over the years, he hunted down ants in Aviemore, Chobham Common, Box Hill, Nethy Bridge, Parkhurst Forest, Rannoch, the New Forest, Matley Bog, Sandown, and Weybridge Heath, but his favourite stamping ground was Windsor Great Park, where he was granted special permission to collect as many ants as he liked, and where many of his discoveries were made. I ought not, perhaps, use the phrase “stamping ground”, as that summons a picture of Donisthorpe stamping his big boots upon the ground, surely inadvisable in the circumstances. I have never collected an ant in the wild myself, but I assume one must tread lightly and oh so carefully.

One thing that is clear from that (partial) list of his publications is Donisthorpe’s enthusiasm for new ants. This was to prove controversial, and he was considered to be “overeager” to identify new species of ants. Indeed, of the thirty new species he identified, twenty-four were subsequently deemed to be insufficiently distinct to be considered separate species or to be synonymous with previous valid species. An example of what we might call his pernickety attempts to identify wholly new types of ant is his description of Polyrhachis hosei, where Donisthorpe admits at the outset that “the general description of P.(M.) byyani would do equally well for this species”. He then details a small number of very minor differences, such as “a larger and more robust insect”, “pronotal spines longer”, “the scale has a somewhat wider arch”, and so on.

Indefatigable ant collector that he was, Donisthorpe was fiercely protective of those he gathered up, and would never allow them to mix with ants collected by others. The following reminiscence, by R W Lloyd in a letter to the Entomologist’s Monthly Magazine in 1951, allows us a glimpse of the man, though unfortunately it concerns beetles rather than ants:

Mr Donisthorpe was a very fine Coleopterist, but he had that curious ‘kink’ shared by one or two other people, that he would only put in his collection beetles he had taken with his own hands. Luckily for him he was a man of leisure and he was able to go about the country when he heard of any rare beetles being taken. It led, however, to some curious results, as on a celebrated occasion when a collector in the New Forest got a very rare beetle – Velleius I believe it was – and advised Mr Donisthorpe, who telegraphed him to put a tumbler over it on the ground and keep it there until he was able to go and collect it himself.

When he was not collecting, cataloguing, peering at, and writing about ants. Horace Donisthorpe liked to throw lavish and rambunctious parties at his home in Kensington Mansions, and managed to dissipate much of his fortune in doing so. Just as I shall not be celebrating Saint Patrick’s Day in carouse and revelry, nor will I paint the town red in memory of Donisthorpe. But we should all remember him on this, his 142nd birthday. What better way to mark it than to let him have the last word, in the form of one of the many, many notes he contributed over the years to The Entomologist’s Record & Journal Of Variation?

Homoptera devoured by a bird.

At a recent meeting of the Entomological Society of London, my friend Mr. Eltringham gave an account of some attacks by birds on Lepidoptera, and he said that all such occurrences should be put on record. This no doubt holds good with other insects as well as Lepidoptera, hence the following note.

On June 20th, 1927, at 6.30 a.m., I was looking out of my bedroom window into the garden when I noticed a starling, which settled on a lavender bush, all covered with “cuckoo-spits.” It proceeded to deliberately pick out from the froth all the larval Frog-hoppers, and eat them. I should think this is not a very usual proceeding, as otherwise a flock of Starlings would clear a garden in a very short time, and none of the insects be left. The late Dr. Sharp did, I believe, say that the object of the froth was to attract a wasp, which preyed on the Frog-hoppers! This, however, is not the view usually held by scientists.

Many of the ant-papers by Donisthorpe listed above can be read online, following the links at the Global Ant Project.

Untold thousands of you may have been particularly eager to read this essay, under the misapprehension that it would be devoted to Certain Ants, the legendary quartet of improv racket makers of long ago. You will not be disappointed for long, because if you click here you can listen to a vintage recording.

2 thoughts on “On Certain Ants”