Easter Sunday is the most important day in the Christian calendar, the day when we celebrate the ineffable mystery of the resurrection. In this godless age, some of you may have no idea what I am talking about. I refer you to the 1974 hit single by Mott The Hoople, Roll Away The Stone, which in turn refers to the scene in the Gospel of Matthew 28 : 1–6,

In the end of the sabbath, as it began to dawn toward the first day of the week, came Mary Magdalene and the other Mary to see the sepulchre. And, behold, there was a great earthquake: for the angel of the Lord descended from heaven, and came and rolled back the stone from the door, and sat upon it. His countenance was like lightning, and his raiment white as snow: And for fear of him the keepers did shake, and became as dead men. And the angel answered and said unto the women, Fear not ye: for I know that ye seek Jesus, which was crucified. He is not here: for he is risen, as he said. Come, see the place where the Lord lay.

And when the sabbath was past, Mary Magdalene, and Mary the mother of James, and Salome, had bought sweet spices, that they might come and anoint him. And very early in the morning the first day of the week, they came unto the sepulchre at the rising of the sun. And they said among themselves, Who shall roll us away the stone from the door of the sepulchre? And when they looked, they saw that the stone was rolled away: for it was very great.

The evangelists Luke and John cover the same material, but you get the idea, I hope. 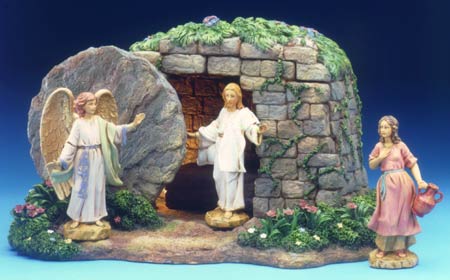 For many years now, my own way of celebrating Easter has been to bathe in the blood of the lamb. During the rest of the year, I bathe as normal, in hot water, perhaps with an admixture of bubble bath, but on Easter Sunday I like to make a special effort in honour of He who is risen. From time to time I have been asked to provide a set of instructions so that others may do as I do. This is not surprising, as I know many of you seek to live your lives as closely as possible according to the tenets of Hooting Yard. To date, I have kept my Easter light under an Easter bushel, but recently I found my arm twisted, as if I were Peter Lorre as Joel Cairo in The Maltese Falcon, until I agreed to explain exactly what you need to do.

First of all, load up your cart with empty buckets and an axe, the blade of which should have been sharpened, lethally, on your whetstone. Get dressed in a big black cape, or alternately in a winding-sheet, the better to suggest an angel of death, and set your features in an awful rictus of terror. Then set out for a nearby field where sheep and their lambs are likely to be gambolling. If you have a yapping dog that could be useful in rounding up lambs and running in circles around them, so they are too frightened to escape, take it with you. It can either ride on the cart along with the buckets and the axe, or, if it is a particularly frisky yapping dog, let it trot beside you.

When you reach the field, take your axe and run screaming at a lamb. Smite it. A cursory knowledge of lamb anatomy can come in useful at this point, for you should if possible try to sever an artery with the first smiting. Then pick up the lamb by a hind leg, hold it over one of the buckets, and squeeze as much of its blood out of it as you can. When you are done, toss the drained corpse of the lamb to one side, run screaming at another lamb, and repeat the process. You should continue until all your buckets are brimful of blood.

If you are a namby-pamby do-gooder who blubs at the sight of, say, a baby sparrow with a broken wing, or a weeping doe-eyed orphan, you might want to hire a ruffian from the local tavern to do the slaughtering and blood-draining for you. I cannot say I recommend this method, however, as tavern ruffians are not the most trustworthy of men, and you will have no guarantee that the buckets he delivers to your door are filled with the blood of lambs. Give a ruffian an axe and he will probably just go and slaughter the first things he sees, which might include your yapping dog, a defenceless widow-woman, or indeed you.

When your buckets are full, trundle the cart home, and clean the blade of your axe with swarfega and borax. You can then take the buckets up to the bathroom. Remembering first to put the plug in the bath, tip the blood from each bucket into the tub. Take off your cape or winding-sheet and whatever else you are wearing, and climb into the bath. Lie back, relax, and hum a hymn. I usually go for The Old Rugged Cross. If you do not know any hymns, that Mott The Hoople hit is a good substitute.

It may be that you live in an area bereft of lambs, perhaps in some sea-girt hellhole where turtles are rife. I have not been able to ascertain any specific Christian connotations relating to the blood of turtles, but the ancient Romans used it for both shampoo and toothpaste and, mixed with human milk, as a cure for earache. The ancient Romans, of course, were pagans, and lived in benighted ignorance of Christ, so do bear that in mind as you, or your hired ruffian, stalk down to the beach bent on slaughter.

NOTA BENE : I am not sure I have my Peter Lorre reference right. It may be that he pleads “Stop twisting my arm!” in a different film – Casablanca? Chapter and verse from a film buff reader would be appreciated.

4 thoughts on “On Easter Sunday”