Have I exhausted the topic of the raking of gravel, specifically the raking of gravel by an eerie and enigmatic handyman-gardener? I suspect I probably have. It is high time we moved on to other topics, ones of more import, even perhaps of lesser import, but irrespective of their relative import at the very least different, wildly, vertiginously different, from gravel, and its raking. There is only so much to be said. Indeed, one might be better occupied actually, physically shifting gravel about with a rake than writing about it. Do not for a moment think that that has not occurred to me. Had I a stretch of gravel on a pathway outside my domain, I would certainly have raked it by now, several times, during the past few days. But the pathway outside my domain is covered with flagstones, and I own no rake. Thus I am compelled to write about the raking of gravel rather than to do it.

It is not beyond me, of course, to go sashaying around my bailiwick until I spot a pathway with gravel scattered upon it, and to march up the pathway to the door, and to hammer my fist upon the door and, when it is opened, to greet the person answering and to offer to rake their gravel for them, with the proviso that they would have to supply the rake, a rake which I would of course return to them immediately after I had finished raking the gravel. I would have to put a stress on this last point to avert the possibility that the person might eye me with suspicion as a potential rake-thief, my offer to rake their gravel mere subterfuge. I like to think I do not cut a thief-like figure, do not carry a fishy stink around with me, but some persons are more trusting than others, and if, for example, the person at whose door I come calling has suffered recent theft of garden implements, I could not blame them for smelling a rat, even if there is no rat to be smelled.

That entire paragraph, however, hinges on the idea that I might be desperate to rake gravel, and I am not. Not really. I do not say that I would not spend a happy five or ten minutes raking gravel if the opportunity presented itself. But it is not an opportunity I actively seek. I am content, as I am sure you have twigged, merely to write about it. I wonder, momentarily, whether one might find an equivalence between writing and raking, the writer and the raker, words and gravel, but only momentarily. After a moment, I slap my forehead with the palm of my hand, with some force, and remind myself that I have all but exhausted the topic, and need to move on to fresh pastures, pastures not strewn with gravel.

Before doing so, however, it will be a good idea to mop up any loose ends. Then we can be sure that the raking of gravel has been covered, absolutely, with the guarantee that we need never return to it. Otherwise there will always be that nagging thought, in the brains of both writer (me) and reader (you), that something has been left unsaid, that we will need to return, at some future date not yet allotted, to the subject, to wring from it further insights, and this thought will necessarily distract us from whatever else it is we ought to be concentrating upon. To paraphrase Lord Denning, “this is such an appalling vista that every sensible person in the land would say that it cannot be right that this thought should be allowed to nag at us”. Lord Denning was not talking about the raking of gravel, nor of what we might have neglected to say about it, but his remarks are apposite, which is why I paraphrased them. I could draw upon other paraphrases, and even direct quotations, in my support, were I so minded. But I am not. We do not want to string this business out longer than we have to.

Here, it is nevertheless worth asking “how long might that be?” What if I, or indeed somebody else entirely, were to start a blog entitled The Raking Of Gravel, of which the only subject under discussion was the raking of gravel? Can one imagine daily postages, for years and years, where the topic is ever more thoroughly examined and, as beardy postmodernist fatheads would put it, interrogated? You would have to be mightily interested in the raking of gravel to read such a blog, and to keep reading it, until kingdom come. I am sure there are at least one or two people out there who fit the bill. They will be the ones becoming somewhat tearful and melancholic as we at Hooting Yard now approach the final mopping up.

There may be something to be said about the relationship between mopping and raking, between the duties of a janitor, with a mop, in a corridor, and those of a handyman-gardener, with a rake, on a gravel-strewn pathway. Certainly a janitor can be as eerie and enigmatic as a handyman-gardener, and as given to gnomic utterances. They are cut from the same cloth, generally speaking, though I think it would be a mistake to regard them as interchangeable. Not a serious mistake, with world-shuddering consequences, but a mistake nonetheless.

Note to self : find out the difference, if any, between a janitor and a janissary.

Christ Almighty! I have had it up to here with the raking of gravel by handymen-gardeners! It remains to acknowledge that the original eerie and enigmatic handyman-gardener, Huw Halfbacon, mentioned here explicitly the other day, is a character from Alan Garner’s The Owl Service (1967). It was adapted into a television series in 1969, where Huw Halfbacon was played by Raymond Llewellyn. Here he is, on the right, in a still from the series, many more of which can be seen here. 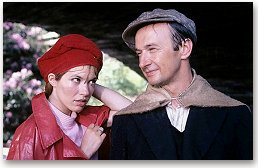