Long, long ago, in 1990 to be precise, I published an immense duckpond pamphlet . . . no, wait a minute . . . a pamphlet the title of which was The Immense Duckpond Pamphlet. The text was a story, broken into twenty-six alphabetically-titled chapters, beginning “A is for Aminadab”, “B is for Blodgett”, and so on. The whole thing has been posted online, so you can go and read it if you feel so minded. If you do, you will eventually arrive at “V is for Violence”, where your reading will be interrupted by a big blot, to wit: 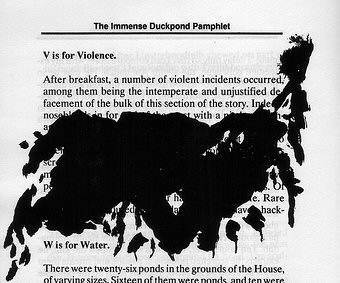 Let me explain what happened. I had been happily scribbling away, from the letter A through to the letter U, without much in the way of an ache in the brain. In fact I was getting along swimmingly. Unusually for me, I think I had already worked out how the tale was going to end. But I was not entirely sure how I was going to get there, and with the letter V, I ground to a halt. At the time, I probably thought I was suffering from writer’s block, an ailment I am now convinced is a phantasm. What we call “writer’s block” is basically an excuse to stare out of the window and make a cup of tea. In 1990, I suspect I stared out of the window, downed a bottle of hooch, and fell asleep. When I woke up, I probably downed another bottle of hooch and fell asleep again. Eventually, I will have emerged from such debauch and returned to The Immense Duckpond Pamphlet, yet still found myself unable to get from V to Z . . . or at least from V to W.

This was when I had the bright idea of circumventing the need to write Chapter V by inserting a big blot. I could then sally on with renewed vigour to W, that bit closer to the home straight. So I typed up a few coherent words and then typed gibberish, and I got some ink and obliterated all but a few traces of the gibberish. In retrospect, I have to say it was an excellent method of moving the story along. And it is the blot, rather than the story, which is my subject today.

It seemed to me that the blot needed to be more than a mere blot, but an integral part of the story. For this reason I considered using one of the Rorschach blots. When Hermann Rorschach – who, like William Tell and Alain de Botton, was Swiss – devised his test, he created ten “official” inkblots. I studied these in great detail, and became exasperated at their fearful symmetry. The Immense Duckpond Pamphlet was crying out for an asymmetric blot, for obvious reasons. I took the ten Rorschach blots and fed them into a ripping and shredding and slicing and slashing contraption, hoping never to see them again. I blame the child-rearing practices of Swiss parents in the late nineteenth century, who encouraged their tinies to make “Klecksographs”, or inkblot pictures. Rorschach himself was known to his little Swiss pals as “Klecks”, or “inkblot”, due to his clearly unhinged enthusiasm. Rather than putting away childish things, he constructed a pseudoscience from them, the nincompoop.

With a heap of scrap paper and a jeroboam of ink, I tried out a series of asymmetric inkblots for my pamphlet, until at last I hit upon the perfect design. But to be sure I had got it right, I tested it on several guinea pigs. I do not of course mean real guinea pigs. I made notes of their responses, and now, for the first time, I can reveal the results. The guinea pigs themselves must remain anonymous, for reasons of primness.

Each guinea pig was forced to gaze at the blot for an hour. I then asked them to describe as accurately as possible what they thought they had been staring at, as understood by the pulsating doughy brain within their cranial integuments.

Guinea Pig A : Where am I? Is this the Old Town of Plovdiv? Is that the Central Post Office mural designed by Georgi Bozhilov of the legendary Plovdiv Fivesome? Surely it cannot be! Mother, mother! I feel a chill and a fever! Wrap me up in your winding-sheet and stick me in front of the inglenook!

Guinea Pig C : As it turned on Elm, the motorcade passed the Texas School Book Depository. As it continued down Elm Street, shots were fired at Kennedy; a clear majority of witnesses recalled hearing three shots. A minority of the witnesses did recognize the first gunshot blast they heard as a weapon blast, but there was hardly any reaction from a majority in the crowd or riding in the motorcade itself to the first shot, with many later saying they heard what they first thought to be a firecracker or the exhaust backfire of a vehicle just after the president started waving. Within one second of each other, President Kennedy, Governor Connally, and Mrs. Kennedy, all turned abruptly from looking to their left to looking to their right, between Zapruder film frames 155 and 169. Connally, like the president a World War II military veteran (and unlike the president, a longtime hunter), testified he immediately recognized the sound of a high-powered rifle, then he turned his head and torso rightward attempting to see President Kennedy behind him. Connally testified he could not see the president, so he then started to turn forward again (turning from his right, to his left). Connally testified that when his head was facing about twenty-degrees left of centre he was hit in his upper right back by a bullet, fired in a gunshot that Connally testified he did not hear the muzzle blast from. When Connally testified to this, the doctor who operated on him measured his head facing direction at twenty-seven degrees left of centre. After Connally was hit he then shouted, “Oh, no, no, no. My God. They’re going to kill us all!” [Guinea Pig C continued to blather on like this for hours and hours. I’m afraid he bored me to tears and I stopped taking notes.]

Guinea Pig D : It doesn’t look much like an immense duckpond to me.