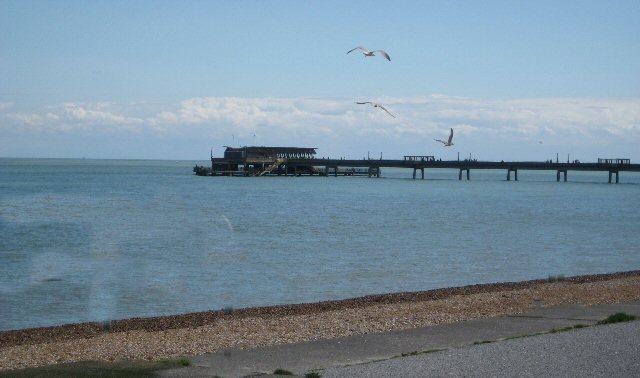 Above is a photograph of the pier at Deal, on the coast of Kent. It is the last pier built in England, opened in 1954, replacing a derelict nineteenth-century predecessor. At its far end, it terminates in a large platform, lower than the main pier, and from this platform, on either side, a set of metal steps lead down into the sea. I think I am right in saying this is an unusual construction for a pier. It is a feature that sparked an idea in the brain of the writer Rayner Heppenstall (1911-1981), who spent the last few years of his life as a resident of Deal.

Early one morning in the late nineteen-seventies, Heppenstall disembarked from a boat and clambered up the steps at the end of the pier. He had come from France, brought across the channel by a somewhat rascally French sailor, who would collect him from the same spot on the evening of the same day. Heppenstall walked along the pier to shore, and through Deal’s dawn deserted streets to his house. He was careful to ensure he was not seen. As far as friends and neighbours were concerned, he was on holiday in France. He spent the day, very quietly, at home, reading over his diaries of the last few years. Heppenstall was a diligent diarist all his life, and often used them as raw material for his fiction, after which he would destroy the originals. He had brought a packed lunch with him, so he would not need to prepare anything and thus create cooking smells. Similarly, when he smoked during the day he dispersed the fumes and removed the evidence from his ashtray. When the cleaner came, in the next few days, she would find no sign that Heppenstall had been there.

When evening came, and his neighbours had all returned home, Heppenstall took a loaded revolver, fitted with a silencer, and went next door, where he slaughtered the entire family. He then made his way back to the pier, where he was picked up from the steps at the end, and taken back to France.

Or rather, that is what he wished he had done. Many of the entries in his diaries of the time consisted of accounts of his neighbours’ behaviour. They were noisy. They were rambunctious. They were foul-mouthed. They were working class, or “common”. Beneath the cold forensic prose lies Heppenstall’s exasperation, his seething rage, his murderousness. These are the diary entries he transformed into his last, posthumously-published, novel, The Pier (1986). I suppose it is unlikely that the noisy rambunctious working class family in Deal ever read the book.

When The Pier appeared, it was taken as further evidence that Heppenstall had “gone mad”. Certainly what we read is the lethal fantasy of a man driven crackers by little more than whistling, games of kickabout football, loud conversation, and noisy bouts of DIY. One of the reasons he and his wife – who becomes his sister in the novel – moved to Deal was that their last home in London was a flat above a launderette, the din of which he found unbearable. Yet I suspect the real reason he was considered to have gone bonkers was the turn his politics took.

Originally from Yorkshire, Heppenstall had always been a tribal Labour voter, a “progressive”. Since the end of the Second World War, he had worked as a talks producer for BBC Radio. He lived in a literary intellectual milieu. In the nineteen-thirties he shared a flat with George Orwell. He was a regular drinking companion of Dylan Thomas’. He made the first translation into English of Raymond Roussel (with his daughter, Lindy Foord). He published several experimental novels and, in the nineteen-sixties was considered a sort of godfather by younger writers such as Ann Quin and B S Johnson. Both Quin and Johnson, incidentally, committed suicide in 1973. Heppenstall didn’t, but considered doing so. For more than three decades he kept concealed behind his bookshelves a phial of crushed pink pills diluted in water, which he regularly refreshed to maintain its potency. It was his guarantee that death was always in his reach. In the end, he never took it. He died of a stroke.

It was around the time of his retirement from the BBC, in 1973, and his move to Deal the following year, that Heppenstall began to describe himself as a “freelance reactionary”. Come 1979, he even considered voting Conservative, though he very probably did not vote at all. But the break from the world and the mindset he had inhabited is all too clear in some of his diary entries. It is unlikely his colleagues in the BBC canteen or the London drinking clubs would have taken kindly to his analysis of the Middle East, that “the Jews are a civilised race, whereas the Arabs are basically savages”. He came increasingly to loathe the modern world.

Was this madness? The reactionary views, the suicide phial, the murderous fantasy? Perhaps it was something in the air in Deal, home to other London exiles such as the alcoholic Charles Hawtrey (thrown out of every pub in town at one time or another) and Simon Raven. Hawtrey’s house bears a blue plaque, but there is no commemoration of Rayner Heppenstall. His neighbours, the annoying children now adults, may still be living in the same house, all unaware that the elderly, withdrawn, ill-tempered writer who once lived next door plotted to kill them all.

I walked along the pier at Deal yesterday, to the steps where ghost-Heppenstall came and went on his fantasy killing spree. I passed some loud, foul-mouthed, working class people, and also a few well-dressed elderly gents taking an afternoon stroll. I wondered if I might see a small French motorboat tied up at the end of the pier. But the steps were empty, descending into the sloshing sea.