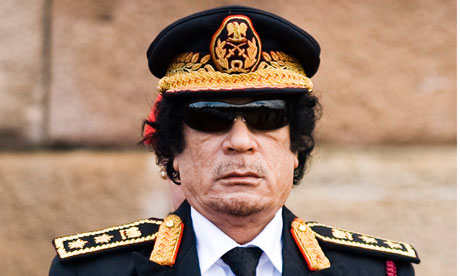 You can learn many things by watching the Eurovision Song Contest. I noted some of them the other day at The Dabbler, but here I wish to confess that it was only when watching Eurovision that I learned to pronounce Malmö correctly. I had always thought that the final ö rhymed with dough. Now I know that it is more accurately a sort of er or uh sound.

This new knowledge led me, by ways I will not bother to explain, to devise a plan for an exciting piece of musical theatre. Now, I have not studied the life and times of Colonel Muammar Gaddafi with any great diligence, nor indeed with any diligence at all. What I know of the late tyrant was picked up from news reports – print and broadcast – over the years. So I have no idea whether he ever paid a visit to Sweden. If he did not, it does not matter, for my musical can be wholly fictional.

The basic premise of my all-singing all-dancing show is that Gaddafi, on a visit to Sweden’s southern capital, is presented by the good burghers of Malmö with an offering of myrrh. I realise this has connotations of the baby Jesus being presented with myrrh – plus gold and frankincense – by the three Kings of Orion-Tar, and that as a result my show might be accused of blasphemy. Well, bring it on!, as they say. We are all aware that blasphemy is a splendid way to drum up publicity. And Christian blasphemy is nice and safe, and wins plaudits for being “edgy” from the Guardian, unlike blasphemy against Islam, which gets you blown up or beheaded and accused of being racist by the Guardian.

The main – the only – reason I have devised this show, however, is as a pretext for the title Muammar’s Malmö Myrrh. That has a pleasing ring, does it not? The great thing about it is that, however clearly and resoundingly you try to enunciate the words, you still sound like a toothless inarticulate wretch.