[This piece first appeared in December 2004. How things change. Four years ago it appears that a contraption called the telephone was still in use at Hooting Yard, rather than the more familiar, and much groovier, metal tapping machine.]

Throughout his life, Dobson ignored Christmas, but he loved to celebrate Boxing Day. Every year, he made a point of marking the occasion differently. Here is his journal entry for one year during the 1950s.

Ah, Boxing Day at last! What a glorious day it is. This year there is snow on the ground, robin redbreasts hopping about, and Dickensian scenes of wassail and carousing over by the old thatched tavern. That being the case, I have nailed fast the shutters and am sitting in the gloom. I wired up a microphone next to the indoor wasps’ nest, so hectic buzzing drowns out the intolerable sound of carol-singing and suchlike torments.

I breakfasted upon a platter of boiled leeks and steamed viper-heads. I will spend much of the day in the kitchen, boiling more leeks and steaming more viper-heads for my supper. I had a new telephone installed last week, and I intend to take a break from boiling and steaming to call the police. I am going to read out my new pamphlet to the desk sergeant, or whoever answers the telephone, for it concerns police matters, specifically the legal position regarding the theft of leeks from the greengrocers’ and of vipers from the zoo. In the pamphlet, which I wrote in pig Latin, just to show off, I make a full confession to having used thievery to obtain my Boxing Day foodstuffs, and justify doing so with reference to certain historical and/or mythological figures, including Hildegard von Bingen, Sir Herbert Beerbohm Tree, and the Warrior King Anaxagrotax. I also make mention of the prince-electors of the Holy Roman Empire as a way of throwing the coppers off the scent, should they determine to prosecute me.

At sixty pages, it may take some time to read the complete text to the police officer, so I will attach an extension cord to the telephone and drag it into the bathroom, and make my call while nestling in a tub of hot milk of magnesia. Over the past year I have bought a couple of those little blue-glass bottles every week, and should have enough to fill the bath. I will heat the milk of magnesia using Professor Tadaaki’s Submerged Iron Filament contraption, the label on which claims it can boil a few gallons of any known liquid within thirty seconds. Of course, I do not need to boil my bath, far from it. Tadaaki does not provide a thermometer, but I have one somewhere, in a cupboard, and as soon as I have completed this journal entry I shall go in search of it.

After the telephone call, the bath, and my supper, I will put the thermometer back in the cupboard and set a roaring fire in the grate. As I have no coal, nor wood, I will burn the beheaded vipers, for there are many of them and I suspect they will ignite well. I dried them thoroughly by putting them in the airing-cupboard under a pile of blankets. The blankets, incidentally, were not stolen. I wove them myself, when I was a child, and capable of weaving at the loom for hours upon end, humming old Latvian folk tunes to myself. In those long ago days I could never remember the words to the songs, except for one, and that only partially. In papa’s translation, it went like this: “There is a shepherd in the hills / There is a [something] green / But black is the crow in the [something] tree / And lightning blasts the sky / The shepherd’s lass has golden hair / She [something something] milk / But the crow has flown away, my love / And the ducks have left the lake”.

It’s time I made that telephone call. 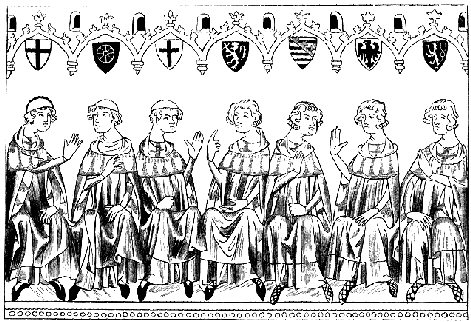 Some of the prince-electors of the Holy Roman Empire, gesticulating.

One thought on “What Dobson Did On Boxing Day”