Dear Hooting Yard, writes “A Traveller”, We understand that your admirable website likes to feature readers’ holiday snaps, and have pleasure in attaching this specimen for your editorial team’s consideration. 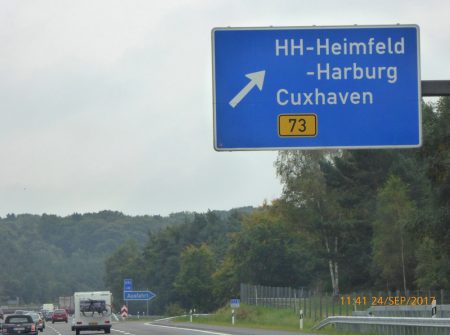 Oh, such an evocative snap! It took me back, back to this, which originally appeared nine long years ago, in 2008 …

I went from Wivenhoe to Cuxhaven by way of Ponders End. For the journey, I wore upon my head a hat woven from the hair of gorgeous hairy beasts, and a pair of goggles. Otherwise, I was dressed in the sort of suit you might see Edward G Robinson wearing in a film noir, with accompanying spats. It was suggested to me that I might take in Nunhead and Snodland along the way, but I had no time, I had no time.

Other than the sea crossing, for which I commandeered a skiff and its skiffer, I walked the entire route. Whenever I became exhausted, I slept upon the ground, under the bowl of night. I would like to say that I grew familiar with the stars, but I did not. Unless it was cloudy, as it often was, I could see countless stars twinkling above me, but they appeared randomly scattered, and I was never able to discern any patterns. I always woke up with strands of hay in my hair, wherever I had slept. I used my gorgeous woven hat of hair as a pillow.

Though I was walking, rather than cycling, I carried with me a bicycle pump. Often I pumped it, pointing it ahead of me, as an exercise drill, and also as a means of dispersing gangs of gnats or midges hovering in the air. Sometimes I fancied I could hear their faint insect shrieks as they were whooshed out of my path. I refreshed myself with water from duckponds.

I tried to keep a steady pace. There were times when I felt the bile rising in my throat. Whenever this happened, I stopped walking, sat on the ground, took my journal from the pocket of my film noir suit, and wrote a memorandum. Here is an example,

I am no longer in Wivenhoe. Ten minutes ago, walking along a bosky lane lined by what I think are plane trees, I pumped the pump at a cloud of midges, scattering them. Shortly afterwards, I felt the bile rising in my throat. Above me the sky is wonderfully blue and dotted with linnets, swooping. Tonight it will be dotted with stars. The stars do not swoop, they stay where they are, far away in the cold universe, so far away that the linnets can never reach them, and nor can I. But I can reach Cuxhaven, by way of Ponders End, and must do so quickly, while there is still time.

The act of writing in my journal always made the bile subside, and I was able to press on. When it was humid, my goggles steamed up. I carried on walking, as if in a mist. When I came to a stream or a rill I would take off the goggles and dip them briefly in the water, and wipe them dry on one of my film noir sleeves. Sometimes a true, engulfing mist would descend. Then I would get down on my knees, even if where I was was muddy, and take from my pocket my little wooden god, and prop it against a stone, and beseech it. Here is an example of such beseeching:

O little wooden god propped up against a stone, I beseech you to sweep away this engulfing mist and to make visible my path, so that I may walk on fearlessly towards Cuxhaven by way of Ponders End. Ooba gooba himmelfarb farbagooba!

The last four word were my incantation, designed to assuage my little wooden god and have it do my bidding. My bidding was always done, for the air would clear, sooner or later, and if the land was flat I could see for miles. One day I was able to see Ponders End far in the distance, and on another day I saw the sea, and once I was on the sea, being skiffed across it by an energetic skiffer in his skiff, I saw Cuxhaven, just in time.

I paid the skiffer to skiff me across the sea. He refused to skiff me otherwise. I had no cash, no chequebook, no debit nor credit card, not even shells or beads or trinkets, but I had honey. Along my journey from Wivenhoe to the coast by way of Ponders End, I had paused whenever I passed an apiary and snaffled honey from beehives. I collected it in pouches strung around my waist attached to a cord, hidden under my film noir suit. Some of the honey I ate to keep myself from fainting, but I was careful to keep some aside, for I did not expect to be skiffed across the sea for nothing. My offer to pay the skiffer in honey was met with great civility, even glee.

I knew that, if ever I made the return journey from Cuxhaven to Wivenhoe by way of Ponders End, perhaps able to take in Nunhead and Snodland given that I would no longer be pressed for time, I would be accosted by several irate beekeepers demanding recompense for their stolen honey. I had time enough, in Cuxhaven, to work out a way to repay them. If time passed and my head remained empty of ideas, I could prop my little wooden god against a Cuxhaven stone and beseech it for a brainwave. If all else failed, I could stay in Cuxhaven, and never go back to Wivenhoe through all the days of my life.

Yet conscience told me this was wrong. It was one thing to be holed up in Cuxhaven, quite another to be holed up in Cuxhaven tormented by guilt that good honest beekeepers had been robbed by my own honey-snaffling hands. Yes, it was true that I bore the bee-stings, but I had sucked the venom and spat it out and rubbed my hands with dock leaves. I still had dock in my pocket, should the bees of Cuxhaven have at me with their stings. I hoped they would not, for I resolved not to take their honey. In Cuxhaven, I had sausages.