Older readers will recall House Of Turps as an out of print pamphlet published by the Malice Aforethought Press in 1989. That’s how I recall it myself. But yesterday, rummaging in a midden, I came upon several sheets of buff paper, the typed manuscript of a piece also called House Of Turps. It bears no resemblance to the published text. It is the “Prologue” to what I clearly intended as a lengthy narrative poem which, equally clearly, I thereafter abandoned. For the benefit of scholars who, I know, devote their waking lives to poring over every syllable I have ever written, here is that fragment of the lost (until yesterday) House Of Turps … 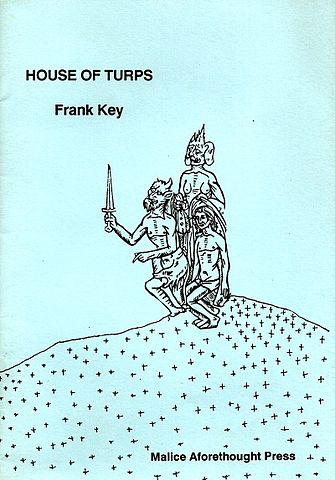 Welcome to the House of Turps,
Riddled with visionaries, idiots, twerps,
Bores, poltroons, maniacs, cranks,
Of the highest and the lowest ranks;
Raised and ruined, rich and poor –
What brings them all to the same door?
A vision of a visionary world.

Each year a pennant is unfurled
From the very top of the House’s walls,
In howling wind, as the mercury falls,
As winter bites. Ice grips the land.
Each member of our demented band
Bids fare thee well to home, kith, kin,
And with a doomed and gritty grin
Sets forth upon a long slow trudge
Towards a circular bank of sludge.
This sludge-bank bars the trudgers’ way.
To cross it takes near half a day,
Weighed down by netting, pig-iron shoes,
Tourniquets, gum, a supply of booze,
Branches, forks, baize and bait –
All gifts for the Keeper at the gate,
The unfurler of the Winter Flag.
He’s eighty-nine. His name is Cragg.
The House of Turps depends on him.
His countenance is pale and grim.
His history’s shadowy and obscure.
He’s lived here since the age of four.

As each guest lurches from the slime
Cragg makes a note of name and time
Scraped on the page with a blood-stained hook
In his huge registration book.
He slams it shut then barks: “Go flee
To room nineteen!” or “twenty-three!”.
The guests head off on a path of gravel
For they have not yet ceased to travel.
The House looms a further six miles’ trudge
Over gravel and pebbles, not slime or sludge.
Cragg remains, hard by the gate,
Until he’s counted in all eight.
We’ll leave him there, improbably dressed,
As we consider each mad guest.

POTATO SMITH is sick at heart,
Festooned with rotten sacking.
He made a fortune in fine art.
His sense of humour’s lacking.
Curt and shrivelled, eighty-five,
He likes to suck wood-splinters.
He is only just alive,
But comes here every winter.

PRIMROSE LEEK, a friend to ants,
Is only thirty-two.
She wears black hat, black coat, black pants,
She’s also known as Sue.
Though dumb in summer, at the House
She speaks the lingua franca.
She murdered Hector Lockjaw Frowse,
The international banker.

Then there’s DR RUFUS GLUBB,
The noted bandage-stainer.
His head looks like a bakelite tub
Topped by a bent tea-strainer.
His belly has grown to a pot
From eating too much custard.
The other guests loathe him a lot
But think he cuts the mustard.

Our fourth pal has a widow’s peak,
Looks not unlike a panda.
C. T. PUCK’s part-Dutch, part-Greek,
Half-blind and part-Greenlander.
She lives on a diet of gruel and slops
And vats of sour beer.
You can’t buy those things in the shops,
But Cragg supplies them here.

LASCELLES DISTEMPER JARLEY
Has no sense of direction.
He is a proper Charlie
And has a cork collection.
He says “by Jove!” and “golly gosh!”
And other dumbkopf phrases.
He talks a huge amount of tosh
And he is prone to crazes.

OLD DOGMOUTH’s fits are legion.
He broke his wooden legs.
Like others from his region
He sets fire to hard-boiled eggs.
Cragg and he are so alike
They could share the same mother,
But Cragg was once an orphan tyke
And Dogmouth has no brother.

SISTER GERTIE of the Cross
Is a religious nutter.
She roams the land astride her “Hoss”,
A goat, a fractious butter.
Moths have fluttered round her head,
Its incandescent light
Proof that she is not quite dead
But shining, dazzling bright.

The last of the guests at the turpentine House
Has crutches painted yellow.
His head is cracked, he’s such a louse,
He’s such a grotesque fellow.
Watch him grow warts upon his ears,
Watch him act agitator.
He’s quite as vile as he appears –
NED HELLHOUND, your narrator.

So now we’ve met this motley crew,
On with our tale of derring-do.

One thought on “Another House Of Turps”