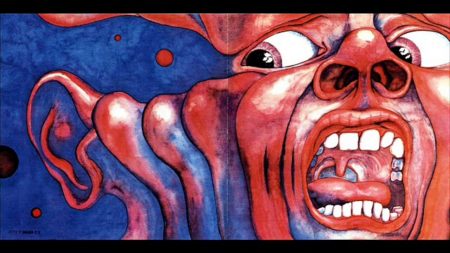 Let us never forget the time Dobson got into a pickle. Hold your horses, you say, Dobson got into multiple pickles over the years, which particular pickle is it I am enjoined never to forget? To which I would reply that I do not have any horses, so cannot hold horses, as you would have me do. After scratching your head for a moment, you suggest I go lolloping off across several fields to some kind of farmstead where I might encounter a flock of horses, some of which I could then corral together with a cowboy-style lasso, and thus hold them in place, as you bid me do.

A what of horses?, I ask, in a tone which imparts both amusement and incredulity, a flock? You are muddling horses with birds, two creatures which could not be more different.

Flock, huddle, gang, murmuration, you snap back, what does it matter? Too much is made of those bestial collective nouns, they are linguistic fripperies, and I abjure fripperies of all kinds, as is my wont.

At which point, enter Robert Fripp, the Dorset-born guitar-plucker. He takes umbrage at being abjured. He flicks a plectrum at you, which strikes you on the cheek, causing you to cry ouch! I stand by, saying nothing, waiting for this altercation to play itself out. For the time being, the Dobson pickle is put on the back-burner.

Are you challenging me to a duel, sir?, you fume at Robert Fripp, likening his flick of the plectrum to the slap across the face of a glove or gauntlet, a common signal of challenge in the golden age of duelling, long past.

By way of reply, Robert Fripp executes some intricate noodling on his guitar, employing a second plectrum he had tucked into the cuff of his shirt. You hoist a shovel, unnoticed until now, which had been leaning against the trunk of a mighty cedar. Shovel held aloft, you run screaming at Robert Fripp in a manner akin to a blood-drenched homicidal maniac. The terrified guitar-plucker ceases plucking, turns on his heel, and scampers away in the direction of Dorset.

Keen as I am to pursue the topic of Dobson’s pickle, and not merely keen but avid, I remain so amused by the flock of horses hoo-ha that I cannot let it drop. Accordingly, I chortle, and there is mockery in my chortle.

You mock me though I am armed with a shovel and quite prepared to use it, as you have just witnessed, you say, giving me pause. I have been bashed with a shovel in the past, on a number of occasions, and I have no wish to repeat the experience. My knees buckle, and I struggle to remain upright.

You reach out with your free hand, the unbeshovelled one, to help me steady myself. I am moved by this unexpected gesture of amity, and tears well up in my eyes. But I am easily moved. One of my parents, the poetic one, observed that I was as easily moved as a mote of dust in an autumnal gale. When I was old enough to think about this simile, I wondered why my poetic parent employed the image of a mote of dust rather than of a leaf, for leaves are what we commonly see being moved and blown by gales in autumn time. This thought occasioned in me an inferiority complex, or what would now be called low self-esteem. Was I nought but a mote of dust in my parents’ eyes, or at least in my poetic parent’s eyes, or rather eye, for Ma had but the one, following a cocktail party calamity at which a cocktail stick became detached from its sausage and a succeeding series of events rendered her eyeless, in one socket. Ma’s remaining eye, fortunately, was gimlet, and it was said she could spot a mote of dust at fifty paces. This was said, in my hearing, by her optician, and it served to assuage my self-esteem, so I no longer suffered, moping, weedily, in the shadows.

You invite me not to further mock you and I accede readily, dabbing at my tears with a rag from my pocket. You put down the shovel, leaning it against the trunk of a different tree, a binsey poplar. We have reached an accommodation. You no longer fear my mockery, and I no longer fear being bashed with the shovel. Now, God willing, we can embark on an agreeable conversation regarding that pickle Dobson got himself into which ought never be forgotten.

But all of a sudden, Robert Fripp reappears. He is accompanied by his wife, the diminutive warbler Toyah Wilcox. You and I shift positions, almost imperceptibly, so we are closer together, forming a united front. This is a stand-off. Nobody knows how it will end. Then, at precisely the same moment, you and Toyah Wilcox lunge for the shovel …

Larks’ Tongues In Aspic plays over the closing credits.