Monday. I celebrated the rite of the taurobolium, tossing my head to and fro among the castrated devotees of the Great Mother Goddess. I infibulated myself, and did all that the eunuch-priests are wont to do. Also decided to celebrate the rite of Salambo, with all the wailing and frenzy of the Syrian cult.

Tuesday. I set aside a room in the palace and there committed my indecencies, always standing nude at the door of the room, as the harlots do, and shaking the curtain which hung from gold rings, while in a soft and melting voice I solicited the passers-by.

Wednesday. I made a public bath in the imperial palace and at the same time threw open the bath of Plautinus to the populace, that by this means I might get a supply of men with unusually large organs. I also took care to have the whole city and the wharves searched for onobeli, as those are called who seemed particularly lusty.

Thursday. Had a banquet. I used silver urns and casseroles, and vessels of chased silver, one hundred pounds in weight, some of them decorated with the lewdest designs. I concocted wine seasoned with mastich and with pennyroyal and I had rose-wine made more fragrant by adding pulverized pine-cone. I made force-meat of fish, and of oysters of various kinds or similar shell-fish, and of lobsters, crayfish and squills. I strewed roses and all manner of flowers, such as lilies, violets, hyacinths, and narcissus, over my banqueting-rooms, couches and porticoes, and then strolled about in them. I refused to swim in a pool that was not perfumed with saffron or some other well-known essence. And I could not rest easily on cushions that were not stuffed with rabbit-fur or feathers from under the wings of partridges, and I changed the pillows frequently. In imitation of Apicius I ate camels-heels and also cocks-combs taken from the living birds, and the tongues of peacocks and nightingales, because I was told that one who ate them was immune from the plague. I served to the palace-attendants huge platters heaped up with the viscera of mullets, and flamingo-brains, partridge-eggs, thrush-brains, and the heads of parrots, pheasants, and peacocks. And the beards of the mullets that I ordered to be served were so large that they were brought on, in place of cress or parsley or pickled beans or fenugreek, in well-filled bowls and disk-shaped platters – a particularly amazing performance, I thought.

Friday. I finished building the reversible ceiling-panels. Once I have packed sufficient violets and rose-petals into the space above, I will invite my rivals and parasites to another banquet, and then have a factotum pull a lever to release the panels, and thus will I smother to death my guests under the cascade of violets and rose-petals.

Saturday. I drove a chariot drawn by four elephants on the Vatican Hill, destroying the tombs which obstructed the way, and I harnessed four camels to a chariot at a private spectacle in the Circus. Then I collected serpents with the aid of priests of the Marsic nation and suddenly let them loose before dawn, when the populace assembled for the more frequented games, and many people were injured by their fangs.

Sunday. I shut up a vast number of flies in a jar and called them tamed bees.

Monday. I am confident my name will be branded in history above all others, because of my unspeakably disgusting life. 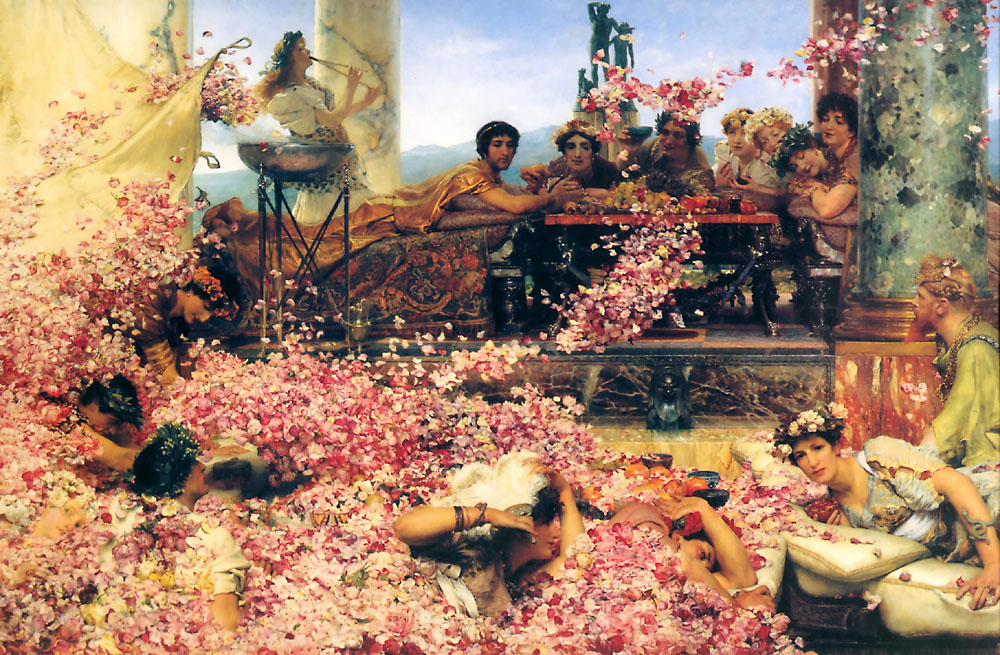 The Roses Of Heliogabalus by Lawrence Alma-Tadema (1888)

One thought on “From The Diary Of Heliogabalus”