From his exile in a pompous land, reader Mike Jennings very kindly alerts me to a newly published film studies textbook from the University of Ülm: 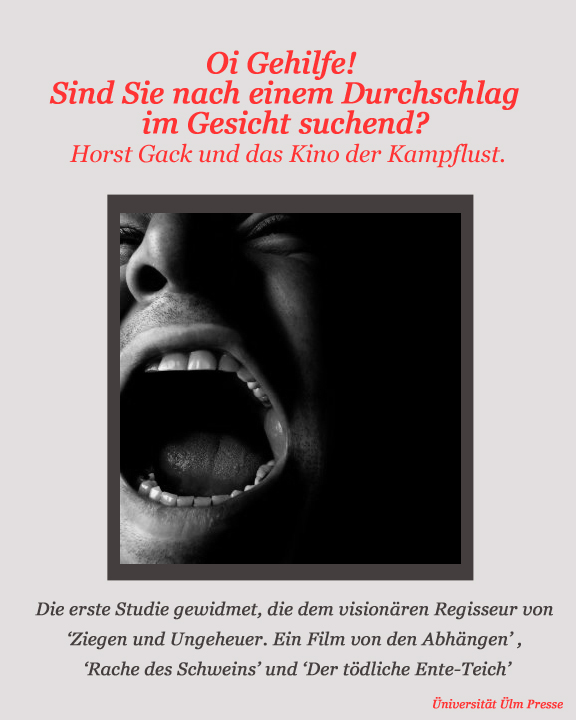 The title translates as Oi Mate! Are You Looking For A Punch In The Face? : Horst Gack and the Cinema of Belligerence. The first study dedicated to the visionary director of “Goats and Ogres: A Film from the Hillsides”, “Revenge of the Pig” and “The Fatal Duckpond”. This thumping tome collects together essays by some of the most incisive and rigorous minds of Teutonic academia. Unfortunately all the contributors have chosen to remain anonymous following reports that Horst Gack’s mysterious wife and collaboratrix Primrose Dent is “not best pleased” with the book. We know not why, but then she is an international woman of mystery, so her motivations and manias are forever hidden from the public gaze.

What is most startling about the book is that it completely avoids the sort of obfuscatory postmodernist verbal diarrhoea that besmirches so many academic texts these days. The formidable German intellects who have turned their brainpower towards the films of Horst Gack do so in prose so plain and simple it can be understood by tiny tots. This passage, from an essay entitled “The Use Of Smudged Camera Lenses In Revenge Of The Pig“, is typical. It was translated for Hooting Yard by our old pal Fatima Gilliblat:

One thought on “Film Studies”