Precisely sixty years ago today, on the seventeenth of June 1950, Dobson was at a particularly low ebb. The great pamphlet-buying public seemed to have turned its back on him, ignoring the many tremendous pamphlets he continued to churn out. The vast bulk of his work to date was already out of print. According to Marigold Chew, it was around this time that he seriously considered throwing in the towel and becoming a janitor with a bucket and mop. 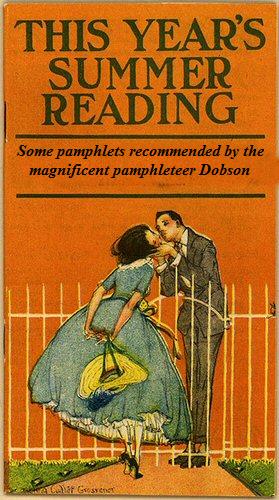 But then, on that June morning, Dobson came up with one of his harebrained schemes. He decided to flood the railway station kiosks of the land with what purported to be an objective guide to the very best pamphlets available. Inside a deliberately mimsy cover, This Year’s Summer Reading (out of print) promised the keen (and even not so keen) pamphlet-reader a list of unmissable pamphlets. Dobson seemed to be convinced that this would drum up sales of his work. Foolishly, however, he devoted the entire list to his own scribblings, without bothering to throw in at least a couple of pamphlets by rival pamphleteers. It was a piece of blatant self-glorification, and was received with both outrage and disdain. It did not help that Dobson used a star rating system for his recommended pamphlets, and then awarded the maximum twenty stars to every single pamphlet he listed.

Some Dobsonists exclude this sorry little production from the canon, perhaps hoping that it will be consigned to the waste chute of history. Others complain that it muddies the waters of Dobson bibliography, given that the pamphleteer included pamphlets he planned to write, but never did. So, for example, alongside the well-loved 1949 pamphlet Chucklesome Fripperies From The Bowels Of Hell (out of print) we find listed Some Remarks On Lemon Meringue Pie And The Film Career Of Nova Pilbeam. No trace of any such pamphlet has ever been found, and though Dobson wittered elsewhere about both the pie and La Pilbeam, he did so in quite other contexts.

It was long thought that the twee picture on the cover of This Year’s Summer Reading was a mezzotint by the noted mezzotintist Rex Tint. However, the latest research concludes that it is a linocut by the noted linocutter Rex Lino.