Fossicking in a cupboard the other day, I came upon a piece of writing I’d done late in the last century. It contains a splendid anecdote which I can now share with you:

In 1994 my sister, who lives in the United States, was on a visit back to England for a couple of weeks. One day we decided to pay a visit of homage to St Patrick’s Roman Catholic cemetery in Leytonstone, wherein lie buried the five Franciscan nuns whose drowning in the mouth of the Thames in December 1875 was the event which sparked Gerard Manley Hopkins to write The Wreck Of The Deutschland. It was an overcast day in late summer, and we trudged aimlessly around the stones, unclear as to what sort of tomb or edifice we were looking for. It is a fairly small cemetery, and after half an hour or so we were on the point of abandoning the search – I think it was beginning to rain – but as we were going back towards the gates we noticed that a light was on in the shabby one-storey building near the entrance. We went in, and were greeted by some sort of cemetery attendant. My sister began, rather haltingly, to explain that we were looking for the grave of some nuns who had been drowned and whom the poet Hopkins had written a… – The attendant held up a hand to stop my sister in mid-flow and, looking over his shoulder towards an ajar door behind him, called “Oi, Mario! Them nuns what drowned…” Enter Mario, another cemetery worker, who promptly led us to the plot, asked if we were German (as the nuns had been), and explained that “quite a few people come to look at them nuns”. My sister began a brief tutorial on Hopkins, but I think Mario had heard it all before – having delivered us to our tombstone, he rapidly headed back to whatever he had been doing before. Ever since, I have mentally subtitled Hopkins’ great poem “Them Nuns What Drowned”. 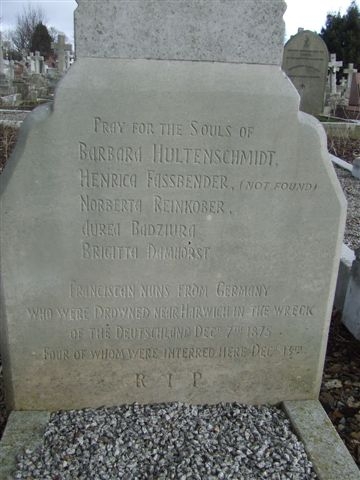 4 thoughts on “Graveyard Anecdote, With Nuns”