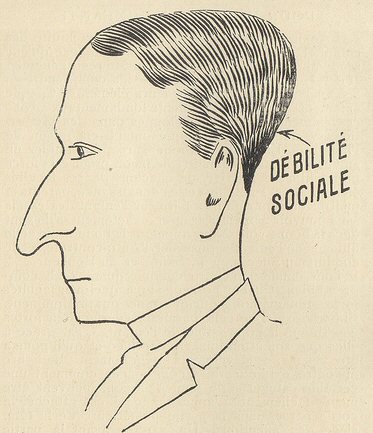 How infuriating that the site of one’s débilité sociale is located, so precisely, low down at the back of the head! This makes it extremely difficult to deal with, when one eventually gathers sufficient courage – moral and physical – to do something about it. Whether one intends to tweak it with tweezers, modify it with blows from a hammer, or wrench it out entirely with a pair of pliers, its position makes any approach fraught with difficulties, difficulties which may prove insuperable to the sufferer from débilité sociale in particular. Why on earth did God make us in so cack-handed a manner?

Add to that the dexterity required to deploy one’s tweezers or hammer or pliers at the back of one’s bonce without doing oneself a mischief and one can appreciate how perilous the process is certain to be. What was the Lord thinking?

An alternative of course is to accept one’s débilité sociale for what it is, and carry on regardless. But therein lie even greater disasters, what with one thing and another, to all intents and purposes, speaking in the round, as my old father-confessor used to say, or rather whisper, lugubriously, in his box, after Mass, when the weight of my sins grew too much to bear, and I went to see him, for absolution, and for tips on the proper usage of tweezers and hammers and pliers, which, being that rare thing, a practical priest, he was ever happy to divulge, albeit with equal lugube. Spirit and matter were as one to him. He had not the merest tinct of débilité sociale. At least, I do not think he did, but then I cannot recall ever seeing the back of his head.

(Drawing of head – not the father-confessor’s – from Agence Eureka)

One thought on “Débilité sociale”