One twentieth-century Thursday, under a leaden sky, the balletomane Nan Kew was gadding about the boulevards of Pointy Town when she encountered the Swiss dramaturge Rolf Turge, accompanied by his deputy dramaturge Bob Dep.

Cue much mwah! mwah! kissing of both air and cheeks, immediately after which Nan Kew, balletomane that she was, began babbling excitedly about a new ballet she had seen only the other day, a work of contemporary urgency in which the Hungarian toxic sludge disaster was interpreted in the form of ungainly cavorting and the tooting of piccolos.

“I agree it is both urgent and contemporary,” Rolf Turge managed to interrupt after ten minutes or so, “But it lacks the even greater contemporaneity and hectic urgency with which a dramaturge, particularly a Swiss one, would imbue it.”

Bob Dep remained silent, for unlike many a deputy, he was not facetious.

“Even were I to concede that so unimprovable a ballet could be improved,” said Nan Kew, “Surely an indigenous Hungarian dramaturge would out-turge one from Switzerland, no?”

“Might I suggest,” said Rolf Turge, “That so ballet-bedizened is your balletomane brain that the grand heroics of Swiss dramaturgy fall outwith your pond of competence?”

Had they not been such fast pals, Nan Kew might have taken offence at this. As it was, she made a mental note to ponder, next time she could concentrate on something other than the ballet for a few minutes, Rolf Turge’s curious choice of the image of a pond to represent her area of knowledge and expertise.

Bob Dep, who was skilled in the telepathic arts, chuckled and butted in.

“Ponder ponds as you like, Nan Kew, but the guvnor’s usage merely reflects his, and my, current preoccupation, which is the pond plays of Maud Wasp, the waspish playwright.”

“Have any of them been adapted as ballets?” asked the balletomane, predictably.

“Not as such,” said Bob Dep. If examined, this could be seen as an enigmatic statement, but though he was telepathic, the deputy was as enigmatic as he was facetious, which is to say not at all.

Nan Kew was about to resume her seemingly endless blathering about the Hungarian toxic sludge disaster ballet, but before she could do so Swiss dramaturge Rolf Turge blurted out a dramatic expostulation.

“Look!” he cried, “A hole has been dug in the road, by some agency unknown to us, though we might surmise it to have been a fellow with a spade.”

He pointed, as only a Swiss dramaturge could, with an elegant beringed finger at the hole, and both Nan Kew and Bob Dep peered where he pointed.

The two gentlemen and the lady then contemplated the length of dug-up pipeline exposed by the digging. At that very moment, the astonishingly tall Renaissance man Peter Blegvad was passing by, and he executed a drawing of the scene, helping to make it vivid for us. 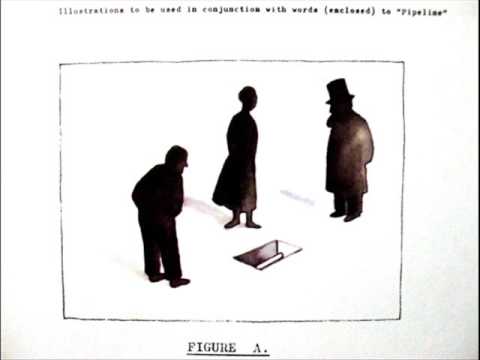 But not, perhaps, as vivid as we would like. The original drawing was fanatic with detail of Nan Kew, Rolf Turge, and Bob Dep, so much so that one might have mistaken it for a hyperrealist linocut by noted hyperrealist linocutter Rex Hyper. But when Peter Blegvad showed the finished drawing to the trio, they became strangely fractious, and insisted that he obscure their features. Reluctantly, he did so, as you can see.

Unbeknownst to Peter Blegvad, the balletomane and the dramaturge and the deputy dramaturge were each of them on the run from the Pointy Town police force, following a series of crimes against the performing arts. How one might commit such crimes is a mystery, as Mrs Robert Fripp might put it. Maud Wasp would put it more waspishly, were anyone to ask her opinion. But nobody did, for she lived in an ivory tower, with her pet wasp Martin, in an atmosphere of Jacobean tragedy.

One thought on “Kew. Turge.”