What with the foul and beastly vice and further spookiness at South Mimms, I admit to lying awake at night, tossing and turning, fretful that nothing of comparable import ever seemed to happen at North Mimms. One likes to think of the Mimms (Mimmses?) as equal in their attractions, albeit those attractions are largely historical. Balanced Mimms are so much easier to comprehend, within my head, than lopsided Mimms. I am going to have to consult a reference work to decide on the proper plural.

To my delight, I have discovered an event at North Mimms to serve as a counterweight to all that shenanigans at South Mimms. The Age Of Wonder : How The Romantic Generation Discovered The Beauty And Terror Of Science by Richard Holmes is itself a wonder of a book. Nige has a postage on it which you would do well to read. In his chapter on ballooning, Holmes tells us of the foppish Vincent Lunardi (1759-1806), a young Italian who made the first manned balloon ascent in Britain, rising from Moorfields in London on 15 September 1784. He took his cat with him. After drifting across London and over Hertfordshire, eating chicken, drinking champagne, and accidentally breaking one of his aerial oars, Lunardi noticed that the cat was numb with cold. He brought the balloon down (by paddling the oars, he claimed, which Holmes points out is impossible), and delivered the shivering cat into the hands of a no doubt nonplussed peasant girl in a field, before reascending and continuing his historic flight. And where was this field? Why, in North Mimms!

I have not yet managed to ascertain the name of the cat, more’s the pity. If any reader knows it, perhaps they would be kind enough to let me know in the Comments. You can see the cat for yourself in this portrait of Lunardi published by Edward Hodges of Cornhill just six weeks after his act of feline mercy in North Mimms. 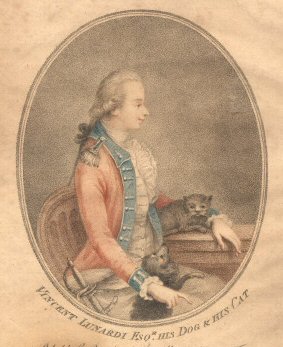