One of the most memorable incidents in my childhood took place in the Newty Field. If I am to be wholly accurate, I would have to amend that to say it took place within my head. It was a dream, but so vivid a dream that for many years I insisted it had really happened. Reluctantly, I eventually conceded that the whole thing was phantasmal. For one thing, my older brother, who was “there” with me, had absolutely no memory of it. Also, on reflection, I had to admit the preposterousness of it as a real event. For all that, it stayed with me, and still does, and I can picture the scene as clearly as I did more than forty years ago.

You will be pleased to learn, though, that the Newty Field itself was all too real. Alas, I use the past tense, as it was long ago covered over with concrete and council houses. It was a patch of neglected woodland, overgrown and pitted with ponds, on the edge of the estate where I grew up. That being so, it was the natural destination for children otherwise confined to a bleak grey postwar suburban council estate with no other redeeming features I can recall. In the oiky parlance of that time and place, the ‘T’ in ‘Newty’ was never pronounced, so strictly speaking it was known as the New’ee Field.

It was not a field, as such. I suppose there must have been newts in the ponds, as well as sticklebacks and other such aquatic beings curiously beloved of children.

The one, dream, incident has overshadowed any other memories of time spent in the Newty Field. I cannot recall how often I used to go there, with whom, or what we did when we were there. I was never one for climbing trees, nor for collecting aquatic beings in a net. I suspect I enjoyed myself in the sort of aimless, dawdling, mucking about that used to keep children occupied in the days before television and computer games, and before paranoia about predatory paedophiles restricted children’s ability to roam without purpose. Perhaps countryside children still experience that kind of freedom. One reason the Newty Field has lingered in my memory, and my imagination, is that it was the closest thing to “countryside” accessible to me. Slap bang next to the estate, small enough not to become hopelessly lost, yet big enough to convince yourself that you were out in the wilderness. In trees and ponds and tangled bracken and clumps of thorns and nettles. As I write this, I realise that the Newty Field itself, at least as I remember it, is the fount and origin of what we might call the Hooting Yard landscape. A faintly squalid, sordid place, rather than one of bucolic beauty. A place where one squelches through muck rather than gambols in the sunlight.

So to my dream. My brother and I were pootling around in the Newty Field one grey autumnal day. It was late afternoon. I was about seven years old, he ten. All of a sudden, we were accosted by a little ganglet of boys, of similar ages to ourselves, none of whom we had ever seen before. They formed a circle around us, and I felt trapped and fearful. That it was a dream becomes obvious when I add that each of the boys had red hair, each was identically dressed in a bright green jumper, and each was armed with a catapult. It is rather like a skewed vision of the seven dwarves. The contrast of the red hair and the green jumpers was startling. Each had loaded his catapult with a stone or pebble. In spite of the fact that they looked almost identical, there was a clear leader among them, and he now spoke, though not before raising and aiming his catapult at us as if ready to shoot.

And then they were gone, dispersing quickly into the trees. My brother and I stood, trembling and frightened, for some minutes before we decided the boys were not going to return. We ran home, a journey of no more than five minutes, completely unharmed, safe and sound. I have no memory of telling my parents what had happened.

Later, I suppose because it was preying on my mind, I did talk about it. It seemed so real to me that I think there must have come a point where the dream became a “true” memory. It was at this stage that my brother disclaimed all knowledge of what I was babbling on about, and I think my parents received the story with a sort of world-weary ho-hum acceptance before finding something more interesting to divert their attention. It was only in my teenage years, I recall, that the penny eventually dropped and I realised the whole episode had only ever taken place inside my sleeping head.

I don’t doubt that a brain-quack could have a (newty) field day analysing the dream and my vivid memory of it, still surviving after almost half a century. Of more interest to me is the realisation, today, of the place the Newty Field occupies in my imagination.

As an addendum, I thought I would search for “Newty Field” on Google. It was pleasing to note that it is one of those phrases, I forget the name for them, which yields only a single result. 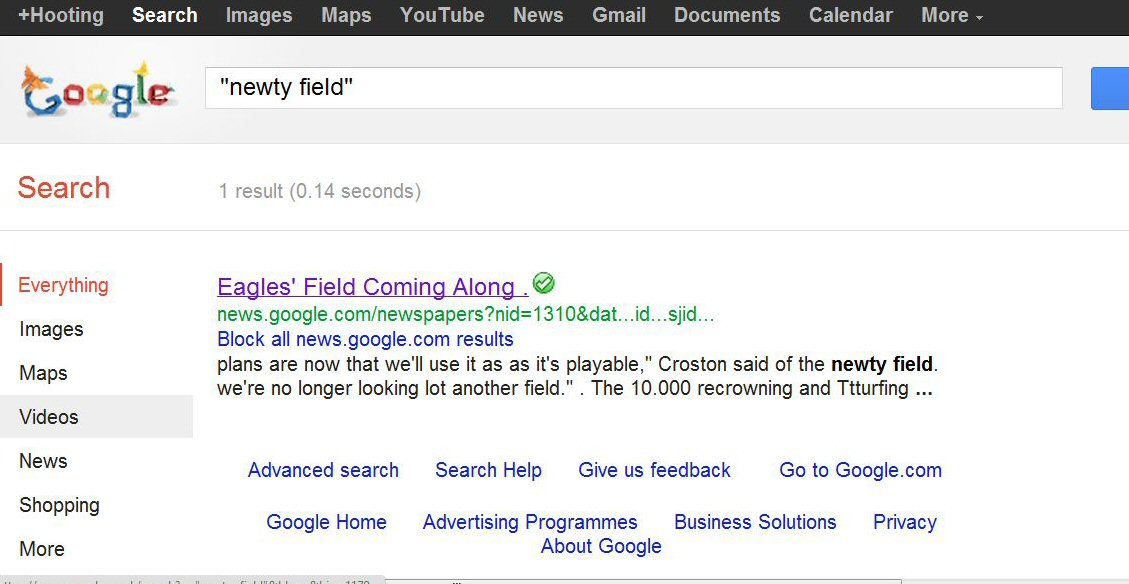 I was even more pleased to discover that this single result is, in itself, inaccurate, and refers to the phrase “newly returfed field”. 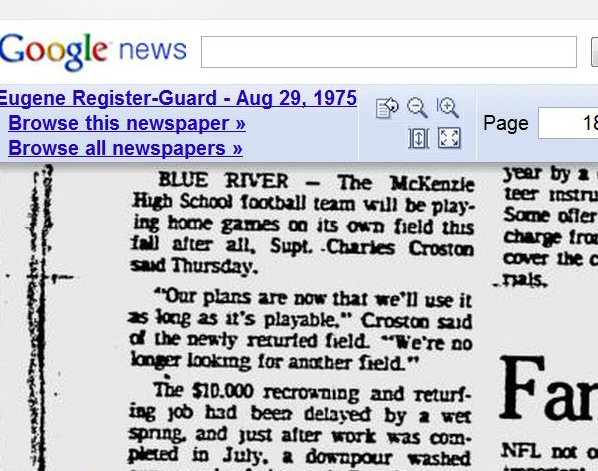 But now I have given the Newty Field its rightful place in history, and in future Google will lead those searching for it to this very piece. I wonder if, among the searchers, will be a red-haired middle-aged man, dressed in a green jumper, thinking nostalgic thoughts of his six little pals, and their loaded catapults, and the two little boys they accosted on an overcast late afternoon in the 1960s, in the Newty Field?

8 thoughts on “On The Newty Field”