Many years ago, in the last century, I began to write an epistolatory novel. The opening sentence, as I recall, was

Dear Professor Talc, Thank you for sending me an envelope full of flies.

There were not many sentences after that, three or four perhaps, before it petered out. I did not even get as far as finishing the first of what, I suppose, ought to have been dozens or hundreds of letters. I have no plans to revisit this abandoned work and to try to make something of it. It was a rather foolhardy idea to make one of the protagonists an entomologist, when I know virtually nothing of entomology. I might have been on firmer ground had I had one, or both, or all of my letter-writers be an ornithologist. Though my knowledge of that subject too is scanty, I am able to blather on about birds in a reasonably fluent manner. I cannot say the same about insects. So had I, for example, begun my novel with the line

Dear Professor Talc, Thank you for sending me an envelope full of feathers.

I might have continued. I might have written a long, involved, and emotionally charged epistolatory novel about a gang of corresponding ornithologists. I might, in my mid-twenties, have written a bestselling blockbuster, the paperback edition with a glossy gold-embossed cover, on sale at all the best airport bookstalls. I might have tasted early success, on a global scale, and as a consequence become a very different type of writer. Instead of languishing, as I do, in penury and obscurity, I might today be lounging on the balcony of an Alpine chalet, hearing the approach of my fawning valet, Jarvis, bringing, on a silver tray, my lunchtime tipple of aerated lettucewater along with the usual pile of urgent pleas from Hollywood moguls seeking to obtain the film rights to my latest book. I might have been looking forward to spending the evening leaning against a mantelpiece at a glittering and sophisticated cocktail party, the cynosure of all eyes. But it was not to be, and all because I wrote “flies” instead of “feathers”, and was thus stumped as to what on earth I could write next.

There is a lesson there, I suppose, but one I have learned too late. Or have I learned it at all? This morning, for example, I awoke with the phrase “on sudden darting movements in the insect world” clattering around inside my head. Before I had even leapt out of bed to ablute I decided it would be the title of today’s essay. And thus it proved. But in the thirty years since I abandoned my novel about a gang of corresponding entomologists, have I learned anything more about insects? Have I learned enough, at least, to write something informative and involved and emotionally charged about insects and their human students? The answer comes easily. No, I have not.

Here is what I do know. That there are certain insects which have the facility to make sudden darting movements, so sudden, so darting, that they fill one – well, me – with wonder. Sometimes these insects will be still for a considerable length of time, so still they might be in suspended animation, or dead, and then – whizz! – in a split second, in the blink of a human eye, they have darted off, to a distant spot, where they might resume their eerie stillness.

This is not true of all insects. Ants, for example, those tiny creeping things beloved of Horace Donisthorpe, are not in general given to sudden darting movements. Consider leafcutter ants, which we admire for their stolid implacable scurrying. They do not suddenly flit from their column, distracted by who knows what ant-distraction. Nor do any number of slow lumbering beetles, which we might encounter toiling slowly across our carpets, bent on to us unfathomable beetle business.

But if we turn our attention to, say, the Gerridae, commonly known as water striders, water bugs, magic bugs, pond skaters, skaters, skimmers, water scooters, water skaters, water skeeters, water skimmers, water skippers, water spiders, or Jesus bugs, these are insects much given to sudden darting movements. Pay a visit to a pond and you might profitably watch them, standing still upon the water on their thin spindly stilten legs, before their attention is caught by some tiny waterborne being which serves them for nutriment, upon which they will pounce and devour. Where you or I would take a knife and fork and ever so slowly raise a portion of food to our mouths, the water strider cannot afford such leisure. If it crept towards the tiny waterborne being at snail’s pace, the being would sink or fly out of reach. Hence the evolutionary necessity, for the water strider, of its sudden darting movement. So too for flies, and other insects I might name were I more learned in entomology than I am.

It is diverting to imagine what a human might look like were we able to make sudden darting movements on a par with certain insects. Let us say I am standing beside you at a bus stop when you spot, across the road and some yards to the left, a toothsome snack for which you have a sudden insatiable hunger. One moment, there you are next to me, and then, in the blink of an eye, you have made a sudden darting movement, and appear, as if teleported, across the road and some yards to the left, stuffing your face in a somewhat disgusting fashion with the snack item.

In The Fly (David Cronenberg, 1986), Jeff Goldblum as Seth Brundle suggests this sudden darting facility by jerking his head in spasms. It is rather disconcerting, to see a human act so, and reminds us of the gulf that lies between us and the insect world. Perhaps we ought to be thankful that we are incapable of such sudden darting movements as are made by flies etcetera. Life is stressful enough as it is. 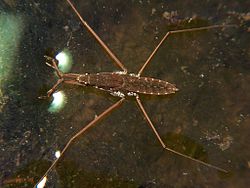 A water strider, snapped before it made a sudden darting movement out of shot