Like absolutely everybody else throughout the land – with the sole exception of Nige – I have become enamoured of Scandinavian crime fiction. That is why, the other day, I picked up a cheap paperback copy of Headhunters by Jo Nesbo and have read about half of it at one sitting. It rattles along. I found myself diverted by this passage:

The second [thing that caught my attention] was a quotation from what are known informally as “Pontoppidan’s Explanations” in which he declares that a person is capable of killing another person’s soul, infecting it, dragging it down into sin in such a way that redemption is precluded.

As soon as I felt able to tear myself away from Headhunters, about ninety pages later – I did say it rattles along – I made a cup of tea and devoted myself to discovering what I could about Pontoppidan and his Explanations. The first thing I learned was that no human being has ever resembled a poodle or a pompom as closely as Erik Pontoppidan (1698-1764). 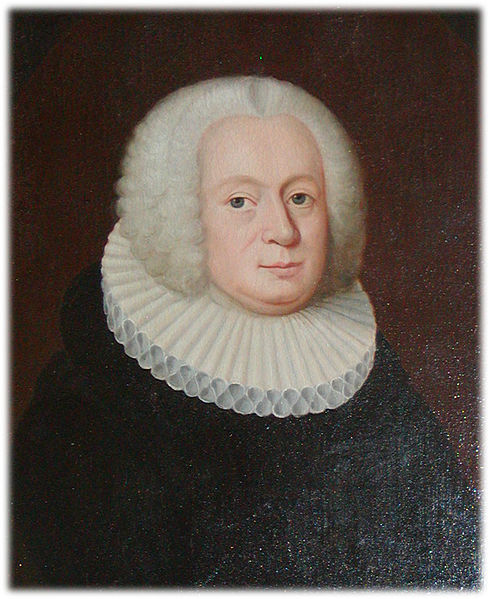 In the Wikipedia, he is listed in the following categories: Danish theologians, Danish bishops, Danish ornithologists, Danish naturalists, Norwegian bishops, 18th-century Lutheran bishops, People from Aarhus. That gives us a reasonably comprehensive picture. As for the Explanations, these appear to be one of his most important theological works, a 1737 official state church explanation of the Lutheran catechism. One might think that makes for rather dry reading, but the part alluded to by Jo Nesbo suggests otherwise. I may have to see if there is an English translation available and pore over it for further references to murder and infection and sin and eternal damnation.

As with so many clergymen of the era, Pontoppidan was also an enthusiastic naturalist and antiquarian. He compiled, in 1763-64, The Danish Atlas, a detailed and ambitious description of Denmark based on information gathered from clergy around the country. His Natural History of Norway (1752–1753), was a description not only of the flora and fauna of the country, but also of the peasant population, their ways of living and thinking, based upon close observation. It is thanks to Pontoppidan that much folkloric material has been preserved.

Among his other works were a standard Danish hymn book, a guide for vicars to help eradicate superstition and reduce devotion to Catholic relics among the peasantry, a four volume history of the Danish church, and a collection of epitaphs transcribed from tombstones.

Of particular interest, at least to me, is that Pontoppidan is one of the earliest sources for our knowledge of that ferocious sea monster, the kraken. In the Natural History of Norway he gives an extensive description of the beast and makes a number of claims, including that the kraken is so enormous it is sometimes mistaken for an island, and that the greatest danger to sailors comes not from the creature itself but from the mighty whirlpool it leaves in its wake. Not that the kraken does not have great destructive power, as Pontoppidan writes “It is said that if [the creature’s arms] were to lay hold of the largest man-of-war, they would pull it down to the bottom”. The image of the kraken dragging a ship down to the bottom of the sea is startlingly similar to the image, in the Explanations, of the soul-murderer dragging the infected victim down into sin. One wonders what tormented phantasms were going on inside Pontoppidan’s head, surrounded by that pompom of snow-white hair and the crisp white ruff.

[This piece is nowhere near one thousand words in length, but I think it best to end there, when I have nothing more to say, than to expand it needlessly by chuntering on. I could copy out bits of Pontoppidanery from the Wikipedia and from the 1911 Encyclopaedia Britannica and from the 1914 New Schaff-Herzog Encyclopaedia Of Religious Knowledge (Third Edition). I could point out that, weirdly, Erik Pontoppidan has his own Facecloth page, which is “liked” by a total of six people. (I am toying with the idea of becoming the seventh.) But, short of immersing myself in certain of the texts, I think I have learned enough, and told you enough, about Pontoppidan for the time being. It is interesting to me that, just a few hours ago, I had never heard of him, and a stray reference led me to find out that little which I have found out. Now, when next I am at an elegant and sophisticated cocktail party, leaning insouciantly against a mantelpiece in my Tyrolean jacket similar to that worn by Christopher Plummer in The Sound Of Music, and the conversation turns, as it so often does, to the subject of the kraken, I shall be able to pipe up with a learned reference to Erik Pontoppidan. Having grabbed the attention of the gathering, I can then dazzle my listeners with abstruse points of Scandinavian theology and amusing anecdotes of eighteenth century peasant life in Norway. I might even throw in a couple of Danish tombstone epitaphs for added entertainment, by which time every single person at the cocktail party will be hanging on my every word. There is every possibility that, at this point, the cry will go up, from one voice or from many, to “please, please tell us what Erik Pontoppidan looked like, Mr Key!” “Well, those of you foregathered and rapt,” I will reply, “If you have ever seen a poodle, or a white pompom, and imagine either of those in human form, then you can summon in your mind’s eye a portrait of our man.” At which point I might sashay away from the mantelpiece and pay a visit to the bathroom, wherein I shall liberally entalc my hair and head and collar, and then reappear among the party guests, a striking tableau vivant of Erik Pontoppidan. It will then remain for me to select a victim, murder their soul, infect it, and drag them down into sin, in such a way that redemption is precluded – if, of course, it is that kind of cocktail party.]

2 thoughts on “On Pontoppidan”