What is it with these clergymen and their phantasms? The other day we had the Bishop of Bergen, Erik Pontoppidan, babbling on about sea monsters, and now we find that rustic Victorian, the Reverend Francis Kilvert, writing in his diary, on this day in 1872:

This morning I conceived the idea of a poem in the style of Tam o’ Shanter – the scene to be laid in the ruined church of Llanbedr Painscastle. Two lovers who had made an assignation in the church-yard to be terrified by seeing through the windows an assembly of devils, ghosts, lawless lovers and murdered children.

Until I read that, I thought Kilvert’s Diary was akin to Gilbert White’s Natural History Of Selborne, a series of observations on rural life and the natural world, gentle and rather winsome. I did not expect lawless lovers and murdered children in ruined churches. But then, I have never read Kilvert’s Diary, and came upon the above entry in The Assassin’s Cloak : An Anthology Of The World’s Greatest Diarists, edited by Irene and Alan Taylor (2000).

Since 1977, Peter Blegvad has had an ongoing project called “Imagined, Observed, Remembered”, best summarised by Mr B. himself:

I began drawing sundry items thrice – first as I imagined them to be, then as I actually observed them to be, and lastly, after a suitable interval, as I remembered them to have been.

It occurred to me that I could apply this idea – at least, the Imagined and Observed elements – in prose rather than drawings, to the Reverend Kilvert. After all, though I have never read the diary, I have heard of it. Where or when it first swam into my ken I have no idea, but I would have come upon stray references to it in my reading from as long ago as my teenperson years. My Imagined Kilvert, and his diary, would be along these lines:

A nineteenth-century country parson, somewhere in England, elderly, with a long white Victorian beard. Daily, he records the passing of the seasons in his rural idyll, concentrating his attention on flowers and hedgerows and birds. Unlike Pontoppidan, he does not include the peasantry in his natural history, though occasionally a peasant might have a walk-on part in a diary entry, for example to impart a piece of rustic lore or wisdom to the absent-minded vicar. We learn little or nothing of Kilvert’s inner life, nor much of his everyday clergyman’s duties. The diary, which has never been out of print since first published, shortly after his death, is still read because he is a superb observer and recorder of the natural world, and evokes a vision of the quiet English countryside that makes it seem a very paradise.

Hence my surprise at the devils and ghosts and lawless lovers and murdered children. Time now for a cup of tea, and then I shall find out what I can about the Reverend, “Observed”, in Peter Blegvad’s sense, by way of reference materials.

I am delighted to announce that I was right about the beard. Well, sort of. (Has anybody ever written a book-length study entitled The Victorian Beard? I would read it.) Sadly, Kilvert (1840-1879) did not live long enough for it to grow white, for he died – of peritonitis – at the age of thirty-eight, shortly after returning from his honeymoon. I was correct, too, to imagine him as a country vicar. After studying at Oxford, he served a number of parishes in Wiltshire and on the Welsh Borders. Other than that, my Imagined Kilvert is a partial and inaccurate picture of the real one, particularly where the diary is concerned.

Though there is much observation of nature, the diary is far more comprehensive in its concerns – as much social history as natural history. It includes comic scenes such as a funeral at Worcester cathedral where the pallbearers stagger under the weight of a “crushingly heavy” coffin, an account of Kilvert bathing naked and disporting himself upon the beach, and a lengthy discussion of venereal disease conducted at a ruridecanal conference. (Now there’s a useful word – ruridecanal: pertaining to a rural dean and his jurisdiction.) The rustic rev also devotes over forty-four passages to descriptions of women and girls, frankly confessing his “susceptibility to female beauty”. His writing has been compared to Hardy, Hopkins, and even to Proust. “For some time,” he wrote in 1874, “I have been trying to find the right word for the shimmering, glancing, tumbling movement of the poplar leaves in the sun and wind. It was ‘dazzle’. The dazzle of the poplars.”

Far from being “never out of print since first published, shortly after his death”, as I imagined, the diary’s history is much more chequered. For one thing, much of the original manuscript has been lost or (deliberately) destroyed. Kilvert’s widow, who never remarried, lived until 1911 and seems to have removed entire sequences recounting “wild sad sweet trysts” with an earlier paramour. The standard selection we think of as Kilvert’s Diary was made by William Plomer and first published in three volumes between 1938 and 1940. Other editions have followed, but as far as I know it has gone in and out of print.

One thing I could not have imagined was the name of Kilvert’s mother – Thermuthis Ashe. It’s not every day you meet a Thermuthis.

As for the poem he was planning, one hundred and forty years ago today, about two lovers who had made an assignation in the church-yard at Llanbedr Painscastle, I have not been able to ascertain if Kilvert ever wrote it. He did write a number of poems, but none were published in his lifetime. The ruined church, incidentally, was restored in the year of Kilvert’s death. I append a photograph of it, no longer ruinous, below. If you peer at it very very carefully, you might just be able to see an assembly of devils, ghosts, lawless lovers and murdered children. 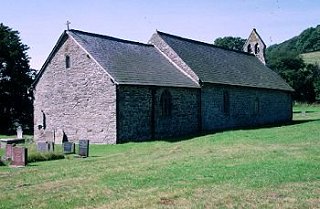