Which is by way of saying I have been giving very careful thought to the dumbing down of Hooting Yard. It has always been my fondest wish, indeed my determination, that each and every dispatch from Hooting Yard is read by each and every person throughout the land, from the chatelaine in her castle to the peasant in his ditch. It is not that I court popularity as such, rather that I know in my bones the ineffable benefits of Hooting Yard upon the human brain.

We live at a time, however, when something like a fifth of our state school self-esteem ‘n’ diversity hub pupils leave after eleven years of compulsory faffing about barely able to read. That being so, if I wish my words to be read by all, I clearly need to pitch my prose at the semi-literate. Initially, I wondered if my vast archive could be turned into a set of simple pictograms, but this seemed defeatist. Then I stumbled upon a couple of books which might serve as models for the New, Inclusive Hooting Yard. 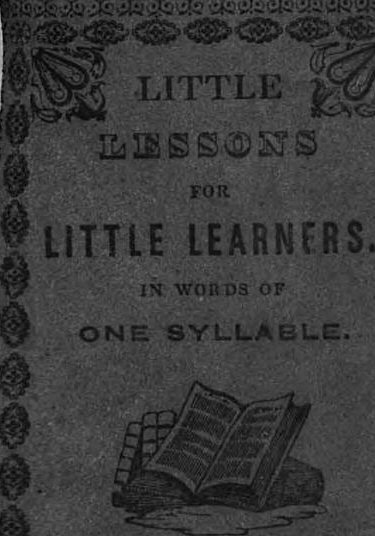 The first is Little Lessons For Little Learners In Words Of One Syllable, printed and published by S Babcock in 1840. Here is one of the “little lessons” in full:

THE PIG AND THE DOG.

This is splendid stuff. One might prefer Tom to be encouraged to poison the dog, as if he were Arthur Rimbaud, rather than merely to hit it, but that is a minor cavil. It is morally improving, instructive, and action-packed – in other words, pretty much like your average Hooting Yard postage. And though, as I have said, the basic idea is for little Mohammed and little Dimity to be able to read it themselves, its monosyllabic nature makes it an ideal text to be shouted, or better, screeched, staccato, and menacingly, at a roomful of terrorised tinies. Once we have sloshed out the brains of the schoolteachers self-esteem ‘n’ diversity facilitators they should realise and relish the efficacy of this method.

The other book to act as a model for New Hooting Yard Prose is A Child’s Life Of Christ, From His Birth To His Ascension In Glory, by an unknown author, for which I cannot find a date. Although this invaluable tome was published in “Altemus’s One Syllable Series”, it does include words of more than one syllable – well, the word “Jesus” – but helpfully divides it into two, as in this thrilling extract:

As soon as the storm had been stilled they sailed to land, and when Je-sus stepped on shore, a man who had fiends came to meet him. He was such a fierce man that no one dared go near him. More than once his friends had bound him with chains to keep him at home; but that did no good, for he broke the chains and ran off and hid in caves that had been dug in the sides of the hills for tombs. There he would stay day and night and would cry out loud, and cut his flesh with stones. He would tear off his clothes, too, and no one could do a thing to help him or make him less like a wild beast.

But when he saw Je-sus he ran to him, and cried with a loud voice, What have I to do with thee, Je-sus, thou Son of the most high God? I pray thee not to hurt me. Then Je-sus bade the fiends (for there was more than one of them) come out of this poor man, A large herd of swine fed on a high hill near by, and when the fiends found they must come out of the man they begged that Je-sus would let them go in the swine. He said they might do so, and as soon as the herd felt the fiends in them they rushed down the side of the steep hill and were drowned in the sea. Then the men who took care of the swine ran to the town and told all that they had seen Je-sus do; and the folks went out and begged him to leave their coasts. When they saw the fierce, wild man clothed and in his right mind, and when they heard of the fate of the swine they feared to have Je-sus stay in their land.

The man out of whom the fiends had been cast was so full of love and thanks to Je-sus that he begged to stay with him all the time. But Je-sus knew it was best for him to be with his own folks, so he said, Go home to thy friends and tell them what great things the Lord hath done for thee. The man did as he was bid and soon the whole town knew and spoke of the strange tale.

I suspect, incidentally, that this “man who had fiends” was actually the Grunty Man, or, I suppose we should say, the Grun-ty Man, just as the great twentieth century pamphleteer Dobson must henceforth be referred to as Dob-son.

So I have much work to do! I will have to trawl through eight years’ worth of archives amending all the Hooting Yard texts into dumbed down monosyllables. But it will be worth it, if only because when I am done, I will be able to shout, or better, screech, staccato, and menacingly, the texts at roomfuls of terrorised tinies. They will learn, and I will be amused. It is, as a dumbed down person might say, a win-win sit-u-a-tion.